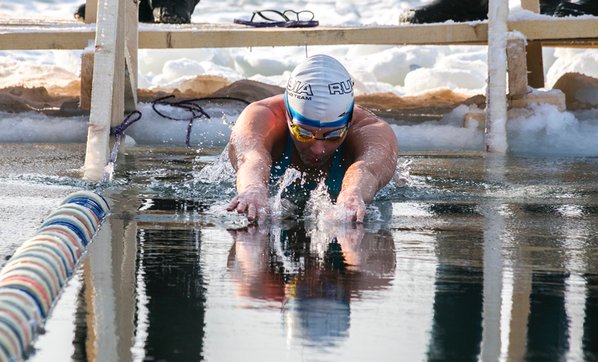 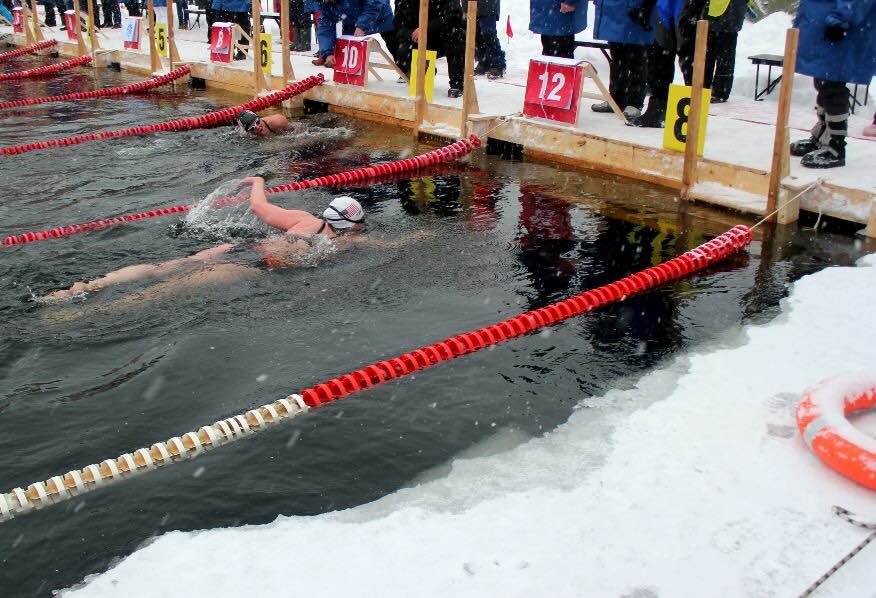 The 36-year-old winter swimming luminary has a much easier time competing in the 2016 National Winter Swimming Championship in Manhattan than the international events that she competed in 2015.

Hosted by the U.S. Winter Swimming Association (USWSA) and the Coney Island Polar Bear Club, the first-time event will conducted at the waterfront of La Marina on the Hudson River in northern Manhattan with the iconic George Washington Bridge as a backdrop.

“The water temperature in the Hudson River is expected to be around 35°F to 40°F (2°-5°C) and the air temperature will range from 38°F to 29°F (4°C to -1°C). Individual races covering distances between 25 meters and 1 km,” writes local ice swimmer Capri Djatiasmoro. “For decades, the sport was dominated by athletes from Scandinavia, Eastern Europe, and countries with a long history of cold water swimming. But in recent years, the tradition has spread to Western Europe and the United States. Athletes representing the USWSA have been winning medals and breaking records all around the world. The US Winter Swimming Association, together with the famous Coney Island Polar Bear Club, is proud to organize this great winter event.”

“There is a group of a cold water enthusiasts who swim year round in New York’s waters, even during the recent blizzard. The Hudson River is the perfect American venue for the National Championship and the swimmers competing on Saturday will make New York City history and we are all eager to spread the excitement of this sport,” says Cristian Vergara, President of the U.S. Winter Swimming Association.

“Winter swimming is a combination of a healthy lifestyle and sports. New York has been celebrating this tradition for decades and some great Winter swimmers have represented the United States in championships around the world. It’s good that USWSA is now hosting an event that will help build a good future for the tradition,” explains Finland’s Mariia Yrjö-Koskinen, President of the International Winter Swimming Association.

“I am excited to return to my home waters and help put New York City on the map as a winter swimming destination,” says Monahan who has swum in all kinds of conditions, temperatures and venues from Antarctica to the Arctic Circle.

“I went down to Antarctica to run a marathon there in March of 2015 and also did a solo swim at Paradise Bay before heading straight to Murmansk [Russia] above the Arctic Circle to compete at the first World Ice Swimming Championships later that week [where she won her age group in both the 1 km race in 18:23.52 and 450 meter race in 7:34.46]. 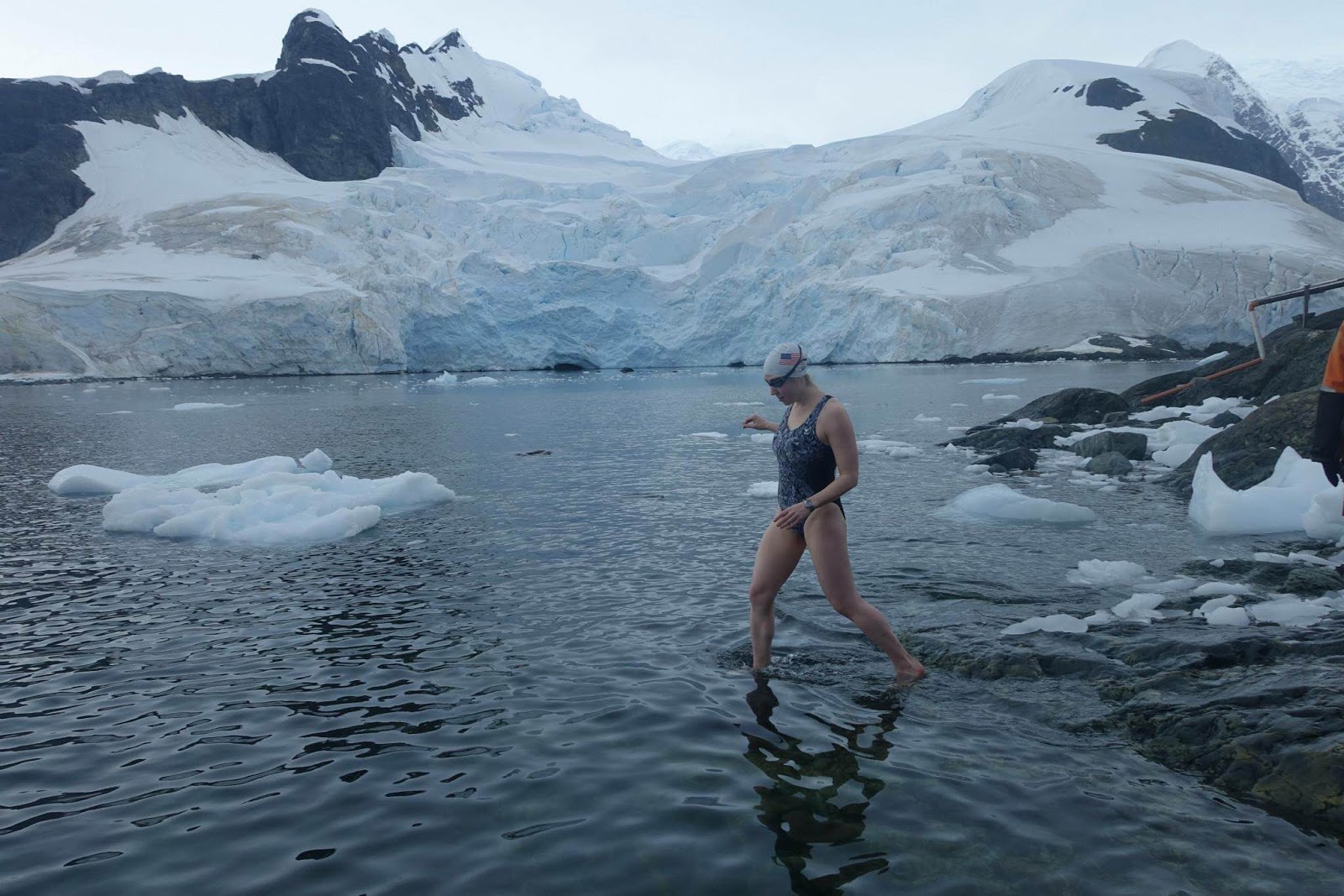 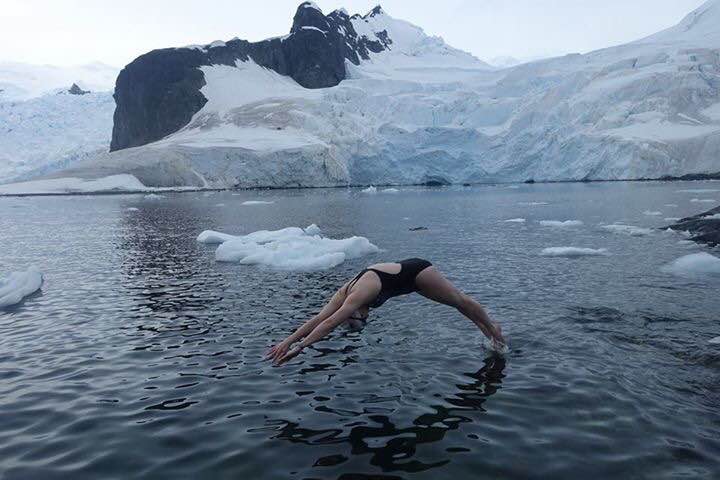 While the Hudson is pretty close to Monahan, her races last year took her literally around the world. After she left New York and traveled down to South America to do the run in Antarctica and then swim in Paradise Harbour, she had to travel north…a lot. “It was a couple of days on a ship from Antarctica via the Drake Passage and the Beagle Channel to Ushuaia in Argentine Patagonia. Then from Ushuaia, I flew to Buenos Aires, then took an overnight flight from Buenos Aires to New York City where I took a quick trip home to repack my suitcase and then head back to the airport.

From New York City, I traveled to Moscow, then Moscow to St. Petersburg, then on to the Hero City of Murmansk for the World Championships.

It was completely worth it for two once-in-a-lifetime opportunities. After traveling around the world to swim in so many amazing places, I am excited and curious to see what the USWSA has planned for us this weekend.”

The top photo is from Murmansk. The second photo is of Jaimie Monahan taken by Nuala Moore during her 1 km ice swim in Murmansk at the World Ice Swimming Championship. The last two photos of Monahan in Antarctica are by Arik Thormahlen.