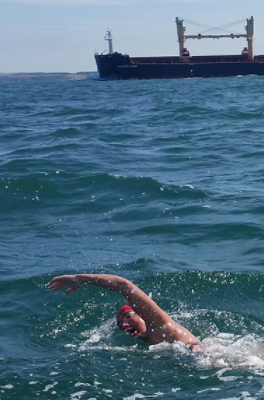 English Channel swimmer Rachael Lee was awarded the Outsider Woman of the Year for 2016 by Outsider Magazine at the Sugar Club in Dublin last night.

The 37-year-old mother of twins from Dublin became the fastest Irish person to ever swim the English Channel. Her time of 9 hours 40 minutes was all business. Her feeding were efficiency defined. “You stop for longer than 20 seconds each time, and that all adds up to another hour in the water.”

Lee demonstrated the grit that open water swimmers are known for. “I got stung on the face [by jellyfish] five times. I was swimming straight through them. I was just relieved I didn’t see any Lion’s Manes which are the most painful.”

Lee’s effort was also years in the making. As she balanced her training regimen with the upbringing of her boys and her job with the Dublin Fire Brigade as a Swift Water Rescue Technician, the demands on her time started at 4 am when she swam 16 km in the pool on her long pool training swims. Her perseverance paid off at the end of her English Channel swim when she faced the lateral currents pushing her away from her goal within 6 km of France.

“I knew my Channel swim started at 8 hours. That’s what I trained for, and that’s what I did. I just had to work harder; 90% of swims fail a few miles from France. But I totally enjoyed it.”

Her joy in pushing herself has now been transformed into coaching others in her club called Ocean Breakers.