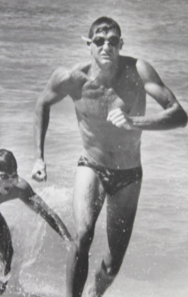 The 1993 Waikiki Roughwater Swim was an event filled with studly ocean swimmers including Olympians and national champions. It was so fast that the 1993 race was one of the few times since 1972 that no women placed in the top 20 (Lisa Hazen was the first woman in 22nd place).

Australian Darren Turner, one of the most physically imposing ocean swimmers from Wollongong, won that 1993 race.

Between the late 1980s to the early 1990s, Turner was on a tear, competing and winning everywhere he swam: