Skip to content
Previous Next
Alick Wickham, Surfer And Swimmer 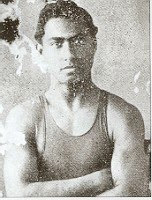 Alick Wickham was truly an aquatic innovator and pioneer as an open water freestyler, a body surfer promoter, a world-record high diver, and a surfer shaper.

Wickham was from Roviana Lagoon in the Solomon Islands abd was credited with shaping the first surfboard in Australia in addition to introducing the crawl stroke (freestyle) to Australia. He initially demonstrated the crawl at Bronte Beach in Australia, although the freestyle at that time was widespread among local people in many parts of the Pacific.

Wickham also established the still-standing world high dive record at 62.4 meters (205 feet) while diving into the Yarra River. He was reportedly in a coma for a week after.

Using freestyle, he also played a role in the development of body surfing when he was catching waves in Manly Beach in Sydney and was inducted in the International Swimming Hall of Fame as an Honor Contributor in 1974.

23 years after Captain Matthew Webb shocked the world with his unprecedented swim across the English Channel in 1875, the 7-year-old Wickham traveled from his native British Solomon Islands to Sydney.

Unlike the breaststroke that was predominant in 19th century England, Wickham swam “with his head held fairly high, turning it quickly from side to side breathing with each complete stroke, his wooly head apparently not getting wet. The entry of his arms was short and towards the centre line of the body with the elbows well bent. His arm action was very fast and short. Each arm performed a symmetrical action with the head turning from side to side as if breathing on each side, but only breathing on one side to each stroke,” so wrote Forbes Carlile.

Throughout the 19th century, mostly breaststroke was used in competitive swimming throughout Europe, although sidestroke was also used.

The freestyle was first seen in a swimming race held in 1844 in London where it was demonstrated by Native Americans. Two Anishinaabe, Flying Gull and Tobacco, from Canada (First Nations) were invited by the British Swimming Society to race one another in an exhibition at the swimming baths in High Holborn. After the demonstration, English society considered this style to be barbarically “un-European” due to the splashing and kicking as the British continued to swim only the breaststroke in competition.

Three decades later, English swimmer John Trudgen introduced an overhead freestyle-like stroke in 1873 after copying the front crawl he saw native South Americans use in Argentina. But his trudgen stroke integrated a scissor kick from the more commonly used sidestroke into the trudgen stroke instead of the flutter kick traditionally used in the Americas in order to reduce splashing.

The hybrid stroke – trudgen stroke – was faster than both breaststroke and sidestroke and started to become more widespread in the later years of the 19th century. 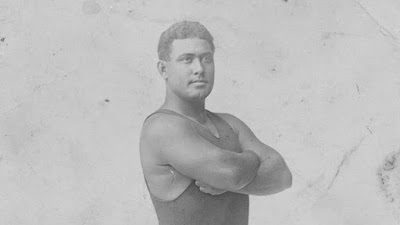 Wickham [shown on left] was part of this trend – not the inventor – and introduced freestyle – as we now know it – to Australia when he demonstrated the crawl at an age group ocean race in Australia’s Bronte Beach.

At the time before the dawn of the 20th century, freestyle was widespread in many parts of the islands strewn across Pacific Ocean and among Native Americans.

On the other side of the globe, the sub-Sahara African people were also known to be very proficient in the water, especially those who learned to swim in the coastal and river villages of west Africa.

According to the International Swimming Hall of Fame, the West Africans were regarded as the world’s greatest swimmers of their era. African swimmers and divers discovered enormous wealth by harvesting pearls and recovering sunken treasures in offshore waters in the course of their slave labor.

The Japanese also continued the development of swimming from suijutsu (水術 in Japanese) that was a part of the samurai’s training over the millennia. The Japanese warriors develop a variety of swimming skills because Japan is surrounded by open bodies of water where combat took place. Depending on the speed, size, and depth of the water that was nearby, different swimming skills were developed. They developed methods for swimming under water, shinden ryu (marathon swimming), kankai ryu (ocean swimming), suifu ryu (river swimming or swimming in fast-moving rapids), as well as several other methods that were based on the topography and waterways (e.g., coastline or mountain areas). For example, if the samurai had to fight while wearing armor, they would study the kobori ryu where the samurai would eggbeater (tread water) while keeping their upper body above water to fight with swords, fire arrows or guns while in or crossing a river.

So while the Europeans focused on breaststroke and sidestroke for much of its history, it was the peoples of Africa, the Americas, South Pacific and Japan that were developed alternative means to propel themselves in the water.

Why did these different types of swimming styles develop over history?

“This is a question that has not been answered to my satisfaction,” said Steven Munatones. “But I have a theory.” 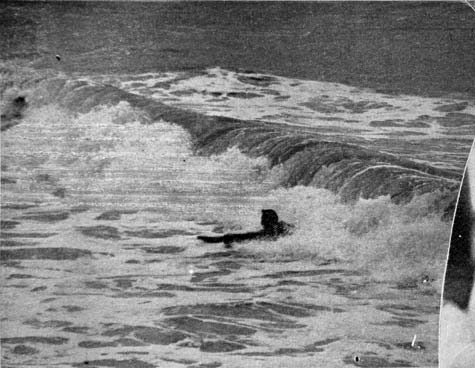 The freestyle stroke is faster and is more conducive to moving quickly through the water, especially due to the more streamlined body and head position relative to breaststroke. So while the breaststroke is comfortable and relatively easy to learn for many, the freestyle most probably took a bit more training and effort to become proficient.

But in the calm conditions of lakes and lidos throughout Great Britain and other major European cities of pre-20th century society, it was not necessary to move quickly through the water. Swimming was a leisure activity with very few people doing it as a profession or even in competition. Breaststroke was sufficient and acceptable in these tranquil conditions – and the preferred swimming style used by Captain Matthew Webb on the first crossing of the English Channel.

But in locations where ocean swells, waves, currents, eddies and tidal conditions made the offshore waters more turbulent, a faster swimming style was necessary. Therefore, it made sense that the peoples of coastal Africa, coastal American cities, South Pacific islands and Japan would developed other (faster) means to propel themselves in the water. People could get in and out of the surf with the more streamlined freestyle; less so, swimming breaststroke. People could catch fish and hunt for – or swim away from – marine life better with freestyle than breaststroke.

In essence, the existence and lack of waves and currents may have played a role in the development of swimming styles over the centuries in different locations around the globe.

“I welcome any comments or findings by anthropologists and historians as to whether or not this theory may or may not be valid. To send information, submit questions or alternative theories or evidence, email [email protected].”