Skip to content
Previous Next
A Summers Day Out In Molokai 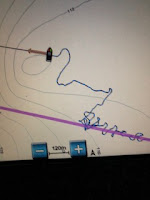 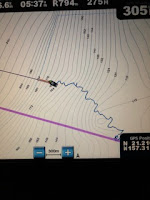 “We had quite the white knuckler out in the Ka’iwi Channel,” reported Michael Twigg-Smith. “Dean Summers finished the course with a grueling 20 hours 12 minutes.

We saw it all. Currents hooking his progress back towards Molokai, dolphins, whales, 2 mahi mahi and an 8-foot oceanic white tip shark.

As we left Molokai at 5:30 pm on Thursday, April 26th, the sun treated us to a beautiful set that lit up the sky.

Then as dark settled in a pesky northward push turned into a north eastward push that, at times, had the escort boat backtracking to do feedings. Luckily, the current relented (not completely) and we made our 5-hour journey back to the rhumb line.

Then shortly after daybreak the kayaker called out – SHARK! It was an oceanic white tip cruising around checking the swimmer and kayaker out. We added another shark deterrent to the kayak and hung one off the outrigger of the escort boat and proceeded. He kept his distance, either by depth or by skirting the area.

After a while we, noticed 2 mahi-mahi (Dorado) cruising right behind the kayak and swimmer. They were nice mouth-watering size, but we were here to help Dean conquer this channel.

They seemed to be finding sanctuary in the field created by the shark deterrents. If they strayed from the field the white tip would immediately take interest and pursue them, so they would return to swim within 10-15 feet of the swimmer. This went on for four hours. Finally as we entered shallower water, our company disappeared.

The humb line was set for Alan Davis Beach, but the north push came back strong and it seemed we may not even make Makapu’u Point. Dean hammered on and powered his way through so that we entered the calmer water inside the point. Instead of swimming another kilometer or two to the beach, he opted to climb out on the rocks at 1:42 pm on Frdaiy in the very spot Attila Mányoki finished his record Molokai Channel swim.”

Summers’ crew included Michael Twigg-Smith as the pilot and observer, Mike Scott as the First Mate and lead kayaker, Chris Harmes as an escort kayaker, Shelley Oates-Wilding as an escort kayaker, wife Kylie Summers as feeder, and Jeff Kozlovich and Steve Haumschild of the Ka’iwi Channel Swim Association.