Skip to content
Previous Next
Daring, Disappointment, Doubt And Discovery 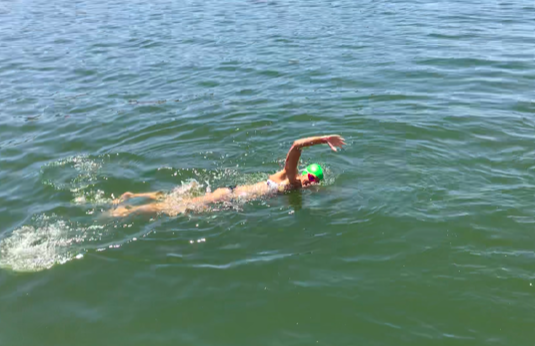 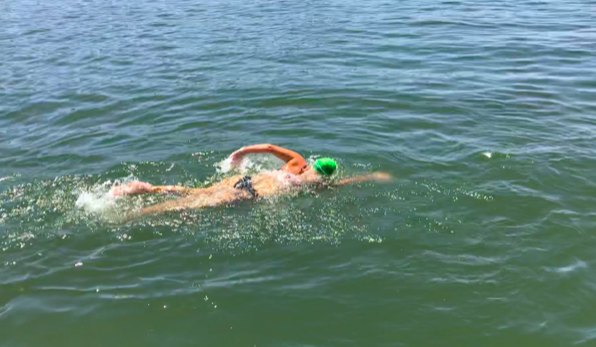 With great expectations and months of arduous training and planning behind them, dozens of swimmers headed to the S.C.A.R. Swim Challenge in Arizona to completed a 9.5-mile (15.2 km) crossing of the Saguaro Lake, a 9-mile (14.4 km) crossing of Canyon Lake, a 17-mile (27.3 km) crossing of Apache Lake, and a 6.2-mile (10 km) night swim in Roosevelt Lake over a 4-day period.

With conditions that continued to be variable not only from day to day, but also from hour to hour, water temperatures that can significantly changed at any time, sudden and strong winds that can wipe up turbulence, and little time to recover from swims in four different reservoirs, swimmers are encouraged by their fellow swimmers and supported by an experienced corp of volunteers, but they faced with various obstacles to success.

While swimmers like Liz Fry and fellow veteran channel swimmers traverse the reservoirs with relative ease and thoroughly enjoy the swim and camaraderie of their fellow marathoners, newcomers and those less acclimated to distances and lower water temperatures face obstacles that can humble them, no matter what their athletic pedigree is.

Lauren Grous from League City, Texas was among the 53 swimmers who lined up to swim a cumulative 64.3 km at the S.C.A.R. Swim Challenge in the Arizona desert.

The 34-year-old former collegiate swimmer was confident in her preparations as she was the fastest woman at the 27.3 km Highland Lakes Challenge 5-day stage swim.

She was mentored by Patty Hermann, coached by Greg Orphanides, and supported by a professional strength expert and Shay Robertson, a nutritionist specializing in endurance sports. Her expectations were high and she was looking to place high.

But there were some chinks in her aquatic armour that only became apparent on Day 1. She spent a majority of her time training in a pool and did very little cold-water acclimatization.

“I started in Wave 3 on Day 1 across Saguaro Lake with 11 or 12 other fast swimmers,” Grous recalled. “We were at least an hour behind Wave 1. As a whole, the swim was absolutely nothing like I expected or trained for. While my feeds were on point and my kayaker did a fantastic job sighting and taking the tangents, I just wasn’t having it after about 8-9 km into into the race.

The first 5-6 km felt absolutely great. I felt fast, smooth, strong. I was leading the women’s race and third overall. I started to slow down a bit, but I attributed it to needing a feed. When we stopped to feed right around halfway, I lost it mentally. It’s like a switch flipped – my mind was slowly starting to take control over what my body wanted to do. Not enough glycogen? Maybe. Just a mental breakdown? Maybe that, too.”

But like her more experienced marathon swimmers at SCAR, she started to dig deep when faced with a massive dose of self-doubt.

“I trudged along for another kilometer or so, at a significantly slower pace, while watching the other swimmers in Wave 3 slowly start to pass me. For some reason, I never lost my energy. I just literally lost my will to keep swimming. What little motivation I had slowly dwindled down to the point where I kept begging my kayaker to let the boat pick me up so I could get out.

He of course made me continue on. I cried on and off the last 2-3 km, struggled with the cold water, the choppy waves from the boats, and the wind. But I persevered and finished.”

Grous was one of the few swimmers at the end who was literally shivering with purple lips while her more hardened competitors came out smiling and commenting that the water temperature was great.

While she struggled towards the end of Day 1, Grous knew that her Saguaro crossing was the furthest that she had ever swum. While she was disappointed to not finish in the top 3, she gave herself credit for finishing. “It was something to be proud of. Let’s hope I can gut it out tomorrow [in Canyon Lake], and then I’ll really have to think about whether or not I want to individually take on Apache [Lake on Day 3]. I’m not sure I have enough insulation or mental capacity to struggle in tough conditions for 17 miles.”

The sense of daring that she had when she was preparing for SCAR was being impacted by a sense of doubt and disappointment – something that every marathon swimmer and channel swimmer faces in their career.

She admitted after Day 1, “I’m missing something that’s allowing me to persevere on for these ultra distances…since I struggled so much and did poorly in my eyes today.”

Day 2 rolled around less than 24 hours later and Grous walked into Canyon Lake with the rest of the field.

Her confidence had taken a significant hit, but her competitive spirit buoyed her and was enough to push her to the 2-mile mark across Canyon Lake. She pulled out due to hypothermia with several other swimmers. Ultimately, her recovery from Day 1 – both physically and psychologically – was insufficient and she aborted the swim well short of her goals.

Yet Day 3 came around – 27.3 km of hard swimming. Her perspective had switched dramatically from disappointment and doubt to another level of daring and discovery.

“Day 3 in Apache Lake at 17 miles was a win for me, based on the expectations my kayaker and I set at the beginning. I decided that my goal for the day was to make it slightly over halfway (9 miles) to Apache Lake Marina. I knew I wouldn’t last more than 4 hours in what for me is very, very cold water temperatures.

Besides the initial shock of yet another below 60°F water temperature at the start at Roosevelt Dam, not only did I get to the marina, but I got there in 3 hours 24 minutes. I internally debated for a few moments about continuing on the other 8 miles, but by mile 8 of so, I had started shivering uncontrollably, as the current the last mile or so brought in significantly colder water (in the low 60°F’s) than the majority of the swim (probably averaged 68°F). I really didn’t feel like shivering for another 2.5-3 hours.”

As can be expected among channel swimmers, the talk among the field was about cold water training. The level of acclimatization of her peers surprised Grous, but also shed light on her weakness. She admitted, “Everyone here trains in cold water. They’ve all talked about it over the week. I’ve never been in water below 68°F, so all my open water training this spring has been in significantly warmer water in Houston.

I came in completely unprepared for this aspect of the race, so yesterday I decided I’m just going to swim for me and have fun swimming, hence the decision to stop halfway.

After Thursday, I was ready to fly home and quit swimming for good. I forget how good I am in warm water and short distances – I realized that is my strength. I’m a racer – I love racing a 5 km or even a 10 km in warmer water. This kind of swimming is definitely not for me.”

But she had one more swim and she was committed to see how far she could go in Roosevelt Lake at night. “I just swam the 10K at a comfortable pace. I told myself to try to stay in the water the whole time, assuming my body can handle whatever the water temperature is.”

She completed the 10 km night swim and discovered her strengths and weaknesses and loves of the open water.

“Roosevelt was great as a whole. There was a terrible headwind from miles 1.5-4’ish, creating some fairly large swells, especially for the kayakers, but I just powered through with my kayaker and built a huge lead, at least over Waves 1 and 2.

I fell apart around mile 5.5. I had a calf cramp from hell and was just tired of being in the water that long.

My kayaker thinks I wasted at least 10-15 minutes complaining and dealing with the cramp at the end, but other than that, it was a success after a really hard and humbling week. Water was warmer – at least bearable by my standards. I felt fairly strong for 90% of the race. Definitely helped get my confidence back that I can put together a decent 10K, even in super tough conditions.

I think the issue is a 10k taking ~3 hours is discouraging, when you are working so hard and pushing and swimming fast and just not going anywhere. Had it been a normal 10K, taking under 2.25-2.5 hours, I don’t think I would have had the mental breakdown at the end/approaching the 3 hour mark.

I am glad it is over, and I’m ready to embrace the next challenge and work harder at getting faster for 5 km – 10 km races around those distances. I learned that is definitely my comfort zone and where I will probably succeed the most going forward.

What made the whole experience worth it was the people, the camaraderie, and the friendships I’ve forged for life. These people are a special breed. Where else can you find 50+ stellar athletes from all over the world, who thrive in cold water and enjoy the pain that inevitably comes with marathon swimming?

I met so many amazing swimmers, so many of which made a huge difference in my life. This week and these people have helped me realize my potential, accept my weaknesses, and they also loved me for me. There was no judgement, just encouragement. This experience was about so much more than just marathon swimming, and I am truly grateful for the opportunity to experience SCAR.”

For a list of all S.C.A.R. competitors, visit here. For more information on the S.C.A.R. Swim Challenge, visit here.

The results from Day 3 across Apache Lake are here (Jamie Ann Phillips Forges Into The Lead In Apache Lake).

The overall results and results from Day 4 in Roosevelt Lake are here. (Night Falls, So Do Records. Jamie Ann Phillips Leads Way).