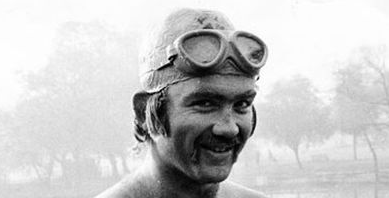 “Kevin Murphy, of Harrow, three times Windermere swimmer and 14 miles in the two-way Windermere, had a somewhat disturbing experience whilst attempting the Weymouth – Lulworth two-way swim on the 2nd October.

Conditions at the start were not good, but Kevin wanted to make the attempt after being disappointed with his two-way Windermere swim.

Conditions worsened soon after the start, heavy rain, rough seas and a force 4-5 wind, and it was decided to abandon the swim. Before being able to tell Kevin and pull him aboard the launch, the outboard engine became entangled in a line and stopped. There was a tremendous downpour which reduced visibility to less than 50 yards, and Kevin disappeared into the mist and rain, not hearing the shouts from the occupants of his boat.

After a few moments, the line was cleared from the engine and the boat took off in the direction where Kevin disappeared, but there was no sign of him. The matter began to look extremely grave. There were no other boats in sight, and it was 9 am on a very wet and windy day, and there was no way of attracting assistance to help in the search.

Out of the rain came a speedboat, tearing along at full speed, to be flagged down and the plight explained to the occupants. The speedboat helped in searching the area, and about 15 to 20 minutes afterwards, it found Kevin about one-half to three-quarters mile away, plodding steadily on, back to Waymouth, keeping an eye on the shoreline.

To say that Mr. Murphy and Greg Schofield were relieved would be the understatement of the year.

The weather had by that time improved and Gregory decided that Kevin could stand a long swim, so a course was taken across the Bay towards Portland Bell and the Naval Submarine Base, along that coast line and then back to Weymouth beach, landing at 3.50 pm after covering an estimated distance of 13 miles.”