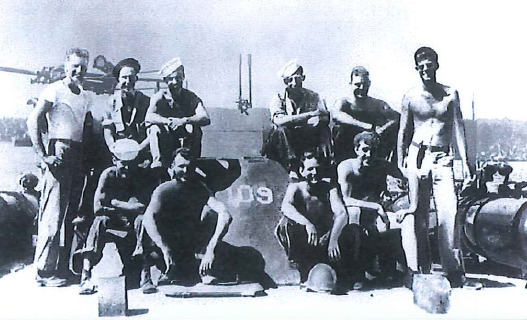 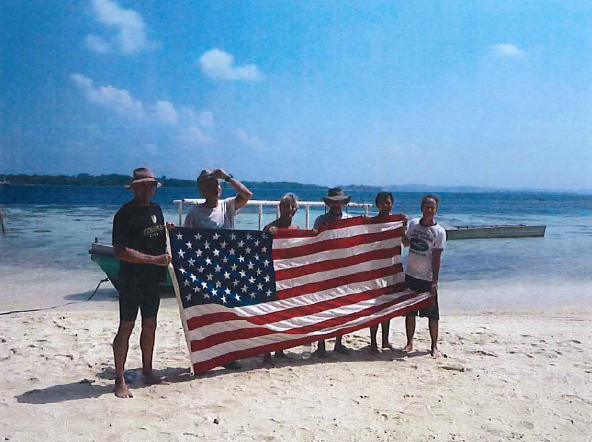 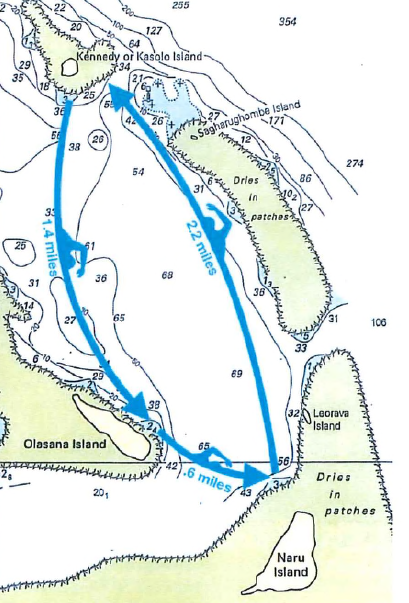 Remembering PT 109: 6-Member Team Swims the Route of the PT 109 Survivors in the Solomon Islands to Mark 75th Anniversary of the Swim That Changed History

Around 2:20 a.m. on August 2nd 1943, the Japanese destroyer Amagiri emerged from darkness and fog to ram through PT 109, an American motor torpedo boat skippered by Lt. John F. Kennedy, that was patrolling in the Solomon Islands.

Two of the 13 crew members were killed instantly. The 11 survivors swam 3 miles to a deserted island, then known as Plum Pudding Island or Kasolo, after daybreak. Two days later, they took to the water again to move to a nearby island called Olasana, in search of food and fresh water. There the crew awaited rescue while Lt. Kennedy made several night swims into Ferguson Passage and Blackett Strait to look for returning PT boats, and daytime swims over to the neighboring island called Naru.

After a fateful encounter with native canoeists Biuku Gasa and Eroni Kumana, who took news of their survival to Australian coastwatcher Reginald Evans and the U.S. Navy, the crew was rescued on August 8th 1943.

75 years later on August 8th 2018, a six-member team – Jack Lundberg, Adrian Mula, John J. Kulewicz, Jay Madigan, Rich Lovering and Peter Canfield – honored the memory of the PT 109 crew by swimming the 4.2 mile route from what is now known as Kennedy Island to Olasana and Naru, then back to Kennedy Island.

The six swimmers headed into the water at 10:00 a.m., after an onshore broadcast of the Star Spangled Banner. Along the course, they contended with moderate winds and forceful currents, as well as occasional stingers. A dugout canoe accompanied each swimmer, along with a lead boat and rear boat. Three grey-tipped reef sharks were sighted during the morning.

Several smaller sharks had been seen the night before.

The swim was strenuous and intense. But the team proceeded through the water without the additional challenges of serious injuries, risk of hostile fire from enemy aircraft and vessels and lack of food and water that had beset the surviving PT 109 crew. The tranquil setting in the tropical South Pacific was a far cry from the fierce combat that had raged across the Solomon Islands during World War II.

The swimmers included an Atlanta lawyer (Peter Canfield), a Columbus lawyer (John Kulewicz), a Columbus lawyer (Rich Lovering), a builder in
Montana and Ohio (Jack Lundberg), an Orlando environmental consultant (Jay Madigan) and first mate from Antigua, on the yacht Antares, anchored nearby (Adrian Mula). Their times ranged from roughly 2.5 hours to 3 hours. The swim was especially meaningful for those team members whose fathers and uncles had served in the American forces in the Pacific Theater during World War II.

In the days before the PT 109 Swim got underway, the team was honored to receive best wishes from former U.S. Ambassador Caroline Kennedy “as you embark on this incredible journey … and for finding such a meaningful way to mark the 75th The anniversary of PT 109. Sons of two other crew members (Ensign Leonard J. Thom, the Executive Officer, and torpedoman Jack Kirksey) and historian Mike Bell of Maine spoke with team members and shared personal memorabilia. Mary Ellen Frawley, sister of Ensign Thom, sent her best wishes and prayers, William Doyle, author of the recently published book PT 109: An American Epic of War, Survival and the Destiny of John F. Kennedy, met in New York with several team members.

A highlight of the swim was the opportunity to meet with the extended families of Biuku Gasa and Eroni Kumana, the two Solomon Islanders who had brought about the crew’s rescue in coordination with Australian coastwatcher Reginald Evans and a team of seven scouts. The Gasa family welcomed the team to their nearby village and homes. Entourages from the Kumana family paid visits to the team, one arriving aboard a speeding boat from which an American flag given to them by the U.S. Navy was waving in the stiff wind and rain.

Danny and Kerrie Kennedy of Dive Gizo in the Solomon Islands arranged the family meetings and skillfully handled all of the logistics for the swim. Danny (unrelated to JFK’s family) is an American expatriate born in Florida who has served in the provincial Parliament. His wife Kerrie was born in Australia. The opportunity to work with them was indispensable to the success of the team.

The team was quartered at Fatboys Resort. Ideally situated across the water from Kennedy Island, the facility bears a name with literary origins that is hardly descriptive of the energetic involvement of all guests in a wide range of water activities. Australian proprietors Karen and John Flynn and the friendly local staff made the swimmers feel especially welcome with their warm hospitality and a wide range of nutritious daily meals.

“The swim was a true test of our spirit and stamina,” said team captain Kulewicz. “My teammates and I were inspired by curiosity, idealism and the love of country and willingness to take personal risks in service of the nation that guided the crew of PT 109 and all who served in World War II. We each left the water with an even deeper respect for the adversity that President Kennedy and the surviving crew of PT 109 overcame.

We head home with an especially grateful memory of all who served in the South Pacific, including the two sailors who perished in the PT 109 collision, and a sincere appreciation for the generosity of the people of the Solomon Islands.”