Skip to content
Previous Next
Using The Elements In Fiji 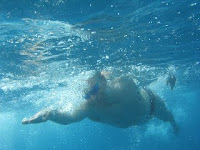 David Handley reported that this year’s version of the Fiji Swims had super fast conditions with fair to strong winds and swells behind (pushing) the swimmers.

But, open water being open water, there were always obstacles thrown in. “The swells were not directly behind the swimmers, so some of the swimmers went way off course,” reported David.

Michael Sheils from Brisbane, Australia and this year’s winner of the 10K Magnetic Island race in Queensland, was on a roll, smashing the previous 18K solo record with a 3 hour and 46 minute swim. From the Sofitel Fiji Resort & Spa on Fiji’s main island to the remote Beachcomber Island, passing several islands and sand bars en route, Michael expertly followed the straightline tangents provided by his experienced crew.

“It was a record year. The three fastest solo swimmers bettered the previous record,” explained David. “The 2009 winner Tiffany Fraser-Gillard came in fourth, also under 5 hours beating her last year time by 15 minutes.”