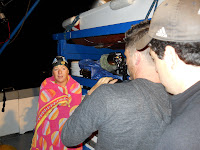 Four Southern California swimmers each took themselves to their limits in the Catalina Channel throughout their 52-hour unprecedented Swim 22 effort.

David’s relay transition to the second swimmer Mike Vovk, on Catalina Island was smooth, but that was definitely not what Mike experienced once he got into mid-channel (see below). Mike, unfortunately, swam right into a small craft advisory warning and was pulled from the water after nearly an 8-hour struggle against the raging elements. As a tribute to his tenacity and courage shown during Mike’s second leg, his support crew each stepped up and continued onwards to the California mainland in an unofficial relay that took 15 hours and 35 minutes.

As the chaotic transformed to the calm, the third swimmer, Jen Schumacher, was next up. As fate would have it, Jen enjoyed a completely different situation than Mike. “I really enjoyed swimming in the evening,” recalled Jen as she finished her leg in 11 hours and 5 minutes under smooth conditions.

Before his last leg, Chris Dahowski cheered on Jen from the Mother Ship and was anxious to get started – fast – under the remarkably smooth conditions. He had seen firsthand how fast Mother Nature can change her personality.

When Chris started, everything was looking bright for a fast anchor leg.

Chris, who was tasked to swim much farther with a finish point near Cabrillo Beach, continued to push the pace and was doing quite well until a shoulder injury and large swells slowed him down. Suddenly, the fast progress he made was slowed – and slowed again. He dug deep and gutted out the long Catalina course as he finished in an unofficial time of 11 and 29 minutes between Doctor’s Cove on Catalina Island and a point west of the outer beach at Cabrillo in Point Fermin Park.

As all open water swimmers know and prepare for: Expect the Unexpected.

The scenes below are just a few of the many backstories and imagery that will be cinematically presented in a dramatic documentary produced by Nick Gismondi of NBC Universal Sports. The athletes’ internal struggles, triumphs and surprises were captured on film and will be presented in an entertaining and educational inside look at the sport of channel swimming.