Skip to content
Previous Next
Filming Footage On The High Seas 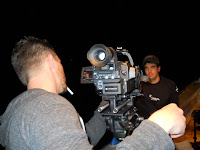 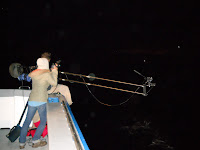 Nick Gismondi of NBC/Universal and Adam Cook and Gina Maria Allen of PostModern Productions were on Swim22‘s Mother Ship.

On Swim22‘s four-way Catalina Channel crossing, the filmmaking trio brought a ton of equipment including an underwater camera housing unit, a 12-foot jib to take unique camera angles of the swimmers in the water and a red-rock adapter capable of shooting HD footage for a cinematic perspective.

Their venture began on a rocky beach beneath on a steep cliff near Los Angeles, only a stone’s throw from a number of aggressive sharks that were spotted off-shore. Before the first swimmer, David Hartmire, entered the raging ocean, Nick and Adam had to crawl over a thick kelp bed and overcome crashing surf on a steep cliff wall to get in position to begin filming.

They captured footage of David and then hustled their way to the Mother Ship carrying a bulky 80 lb. underwater camera. “Fighting that ocean and its surges was tough,” recalled Nick, an Emmy-nominated sports producer. “I can’t believe we are doing this,” with eyes as big as saucers when he was sandwiched between a 4-foot wave and barnacle-covered seashore boulders.

As Adam and Nick hustled their way past the surf zone amid the slimy kelp, David met up with his kayakers and went off on a tangent to Catalina. Scrambling onboard, Adam and Nick met up with their production assistant Gina who had already had come down with a massive dose of seasickness. “Oh God, I think I am going Ralph (vomit).”

David set off at 12 noon and was swimming strongly despite the raging sea with a dead reckoning to Catalina Island. But the constant tidal surges and repeated waves coming from all angles made it impossible for the Mother Ship to hold steady. Yet, Nick, Adam and Gina had to shoot film and take interviews on a boat that never stopped moving: left, right and laterally. Back and forth. Up and down. Side-to-side. It was difficult enough to walk on deck, let alone walk with a Sony infra-red camera and manage the 12-foot jib.

Then the sun started to set and grayness followed with pitch darkness almost immediately following. Now they had a whole new set of circumstances to deal with.

Adam, another action film producer, agreed, “Trying to film in a limited space while the boat is constantly rocking back and forth is tough, real tough. Trying to do it at night is a whole other matter.”

But David was not going to stop and neither were the film crew.

“Did you get that?” “Check this out.” “Get over here.” “Be careful!” The banter between filmmakers and the support crew was endlessly entertaining as they fully emerged themselves in the esoteric world of channel swimming.

Hour after hour, mile after mile, film continued to be shot.

Then came the transition from Swimmer 1 (David) to Swimmer 2 (Mike Vovk) on the second leg near midnight. Cloudy skies prevented the moonlight to shine through and spotlights were aimed at the shoreline exchanged after David’s 11 hour 58 minute leg.

Mike, a 48-year-old executive with Warner Bros., leaped off the island with abandon but with a sense of security as he had two kayakers at his side. Together with his kayaking bodyguards and the lights of the Mother Side shining bright, Mike headed to the Southern California mainland with confidence and joy. “I expect to stop and feed every 30 minutes, so I should start to see daylight after 10 feeding stops or so,” smiled Mike who had a difficult time masking his nervousness before he started.

Then disaster struck and the filmmakers proved their innovativeness and showcased their talents.

When Mike started on the leeward side of Catalina Island, he was in relatively smooth waters as the island protected the swimmer from the elements. But he was soon beyond the protective zone and facing an angry ocean.

The ocean swells had built up to 6 feet and were coming from all directions. Mike, an experienced endurance athlete on land, was in an unforgiving position. Mother Nature was showing no mercy and Mike had entered into a realm of Force 6 conditions.

The winds were howling and the ocean swollen with anger. “What’s happening?” Nick asked since Mike was enveloped in darkness. “What’s his status? How far has he gone?”

Not far, unfortunately. As the rising sun shone on Catalina Island, it became apparent that Mike’s progress was minimal.

After five hours, Mike had only made five miles off the island. Swimming with obvious pain, he had another 15 miles to go with the prospects of being in the water for a total of 20-24 hours. “He is determined to do this,” suggested his wife who was witnessing her husband being tossed like a rag doll by a mad dog.

Once a pace swimmer jumped in to help Mike, the writing was on the wall. “I’m in pain. I’m sick,” reported Mike to the swimmer. He was frequently swallowing water as the ocean found its way to his mouth.

“We gotta keep this [situation] under control. But how is he doing? Is Mike going to make it?” inquired Nick. It didn’t look good and no sugarcoating of the situation was going to make it better.

After fighting the pain while battered by the ocean for another two hours, Mike was finally brought onboard. Getting a limp 200 lb. man onboard in a turgid ocean was tough. Capturing it on film was even tougher, especially on a venue that can best be described as bumpy and lumpy. It was an all-hand-on-deck situation with a fallen swimmer down – and still floating helplessly on an enraged ocean. With teamwork and group strength, Mike was finally heaved on deck wracked with agony.

Capturing the human emotion of failure was incredible to witness. Passionate with a camera and considerate with their boom mic, Nick and Adam politely positioned themselves to film Mike as he was first greeted his wife, then his father and then all his friends and crew onboard. Happy to live another day, but thoroughly disappointed by today’s failure, Mike had given it his all. Everyone had seen a man who took his best shot at Catalina and had left nothing. The Pacific Ocean claimed victory on this day, but there was no shame in losing as Mike soon came to realize.

Jen Schumacher, the youngest swimmer of Swim22, was up next on the second day. Her path was a 20-mile straight line tangent to Catalina from the mainland.

Fortunately, the second half of Swim22 proved to be easier and the filmmaking trio was now totally in the groove. The Bottomscratcher, the 43-foot diving vessel used as an escort ship in Catalina Channel, was now their studio and set. And, fortune was now smiling on the crew as the ocean ironed out which made their jobs significantly easier.

And the extras and subjects they filmed were only too generous with their time and endeavored to fulfill every request made. Even the marine life cooperated as Adam was able to film dolphins dancing around Jen and her kayakers. On the flat canvas of the ocean’s surface, Adam captured four dolphin swimming and jumping around Jen as she could nearly pet them happy mammals.

Night then fell and Jen forged on with her relentless 78 arm strokes per minute pace. Jen was visible because glow sticks were attached to her swimsuit while Jen’s kayakers wore illumination bulbs on their hats. Another four hours of swimming was ahead of Jen under the cover of night.

Nick, Adam and Gina grabbed quick bites to eat and catnaps wherever and whenever possible.

The fourth an last leg is coming up…it is now past midnight and Chris Dahowski is lining up on shore as the anchor leg of this unprecedented event.