Skip to content
Previous Next
Records In Catalina Channel vs. English Channel 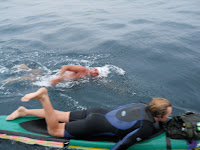 Petar Stoychev was the first person to break 7 hours in the English Channel. Trent Grimsey became the second person to break 7 hours in the 18.2 nautical mile (20.9 statute mile) Channel. But how do these swims among the world’s elite compare to the fastest times of its near-equivalent in the Pacific Ocean, the 17.5nm (20.2 statute mile) Catalina Channel?

Why is that? And how do the top swimmers compare in each channel?

To swim the shortest distance possible, it is definitely more difficult in the English Channel where if a swimmer misses Cap Gris-Nez in France, then the distance becomes greater. In contrast, in the Catalina Channel, if a swimmers misses the absolute shortest point on the California mainland, there is still plenty of land close by to finish on that only requires a few more hundreds of meters swimming.

In the Catalina Channel, there is a great deal of confidence among swimmers that their scheduled day with their pilot will be swimmable. The Catalina Channel may not be exactly flat or optimal on any given day, but the Pacific Ocean is certainly swimmable for the well-trained swimmer. There are specific reasons why the ocean was originally called “Pacífico” because of the calm seas encountered by Ferdinand Magellan on his journey across the world’s biggest ocean.

Contrary to the general comfort and confidence that the Catalina Channel will be swimmable on their given day, athletes facing the English Channel just never know. They could wait for days or weeks, hoping and not knowing when they will swim. The added stress of the increasing financial burden and the fundamental uncertainty can psychologically deflating and frustrating. And this uncertainty in the English Channel – so foreign to the Catalina Channel swimmer – continues not only right up to the start of the swim, but also right up until the swimmer touches land in France because of the tempestuous nature of the English Channel.

It may be for a variety of reasons:

What is universally true is that the channel swimmer in the English Channel and Catalina Channel can both Expect The Unexpected.