Skip to content
Previous Next
Mercedes: The Spirit Of A New Age Premieres In Ireland

Representatives of the Irish Long Distance Swimming Association and other guests were invited to a special screening of Mercedes: The Spirit of a New Age, a film producer by talented filmmaker Clare Delargy, about the remarkable life of Mercedes Gleitze.

Gleitze‘s daughter Doloranda Pember also attended the world premiere in the beautiful private cinema in Comber Co Down. It was a night to remember. “It was surreal to see all the footage and speak with Doloranda so frankly. It was stunning,” said Nuala Moore, Secretary of the Irish Long Distance Swimming Association that governs swims in the North Channel.

“[Doloranda] wanted [the film] to come to the North Channel first as it was so high on her list. We all walked into this beautiful mansion owned by Thomas Andrews, the naval architect who designed and died on the Titanic to watch the movie.

There was so much history to absorb all on one night. As we stood in his living room surrounded by photos from the 1900’s, it was a perfect location to talk about Mercedes and totally suited the story about Mercedes in the same era.” 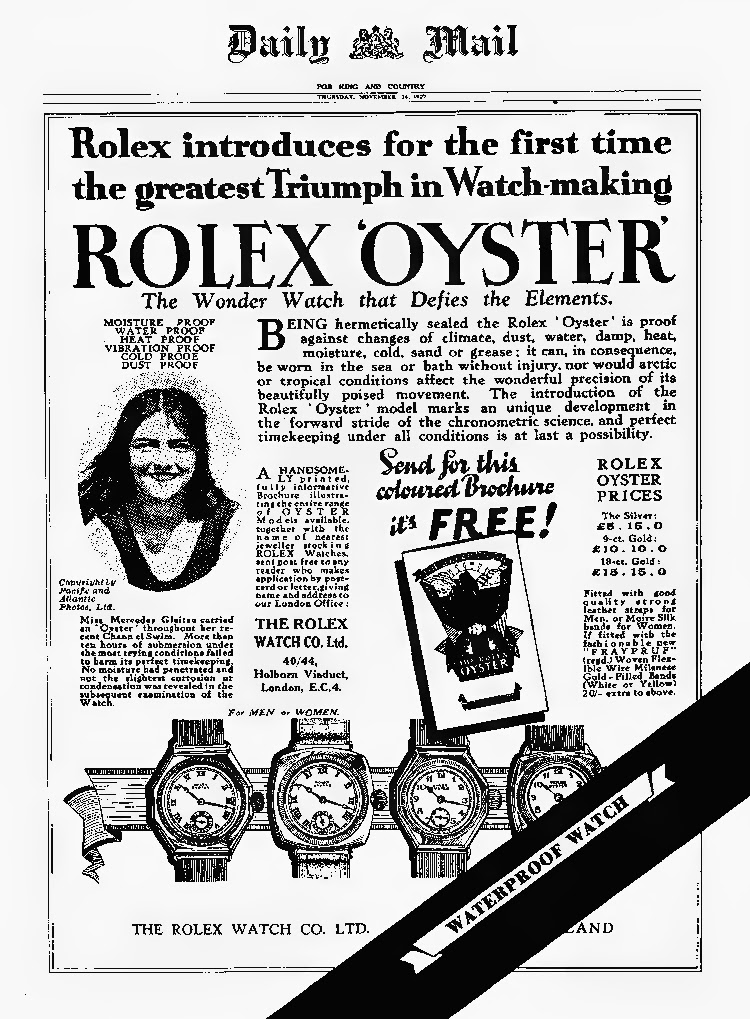 Moore recalls the many firsts that Gleitze attempted and accomplished. “She wore the first waterproof watch, a Rolex [called The Oyster] around her neck during her English Channel swim.

Doloranda is a beautiful woman and her love for her mother Mercedes was so visible. She was in complete awe that we knew so much about Mercedes and more so that we were so interested. ‘The woman that she knew as a daughter was not the woman that we had learned about,’ said Dolorando.

Yet you could really see her pride and excitement when we knew so much about her. We were star struck.”

Delargy’s extensive research and skills in film-making and storytelling create a magic about the renowned British typist-turned-swimmer. “The documentary was stunning,” recalled Moore. “The film showcased testimonials from so many people.

They told of a woman who was so filled with belief, courage and the need to make a difference. [Modern-day swimmers] plan for so much now. Swimmers want everything down to the minutia. [In contrast], Mercedes took risks beyond comprehension. She endured risks of judgment at a time when women wore corsets, when women did not expose themselves to such vulnerability, to failure to criticism yet she continued with such dignity and poise.

She never gave up. Even Doloranda said that the North Channel was her biggest regret. Not that she didn’t cross it, but mainly as after seven attempts – 4 on the Mull of Galloway and 3 on the Mull of Kintyre – but that was she was so close, only a mile from Scotland more than once. Doloranda explained that she always felt that it was possible.”

The film also shows vintage footage of Gleitze taking on the Strait of Gibraltar for the first time in human history, from both sides of the Strait. “The actress who plays Mercedes is Aine McCreesh, the daughter of our Irish Long Distance Swimming Association chairperson Margaret so that was special. She portrayed Mercedes with such elegance and poise.”

The ties to the Irish Long Distance Swimming Association were numerous. President Billy Wallace‘s mother lifeguarded for Mercedes when she swam in Northern Ireland.

Brian Meharg was also integral in the documentary with the documentation he has kept. And Anne Marie Ward could sympathize with Gleitze’s numerous attempts that ended without walking upon onshore as she faced the brutality of the North Channel 3 times before achieving success.

But Clare Delargy was immensely successful with her portrayal of Mercedes Gleitze, a remarkable pioneer in the sport of open water swimming.