Skip to content
Previous Next
Djan Madruga Looking Forward To 2016 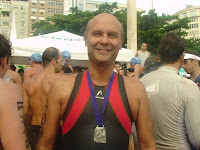 Djan Madruga is a 3-time Olympic swimmer from Brazil who has come full circle: from an Olympic spectator to an athlete to a visionary.

The former Indiana University standout was an all-around swimmer who won a bronze medal in the 1980 Moscow Olympic Games and finished 4th in 3 events at the Olympic Games. Considered the greatest distance swimmer of Brazil, he channeled his endurance orientation to triathlons and ultimately to open water swims where he competes in his home country.

“Swimming is my life. After the 1976, 1980 and 1984 Olympics, I did some triathlons and the Ironman and kept doing masters swimming to stay in shape and have fun. I do a lot of open water swims and have done masters swimming since 1990 [setting world records and winning world championships]. I try to get in 4 kilometers four times per week.”

He still participates in open water swims and triathlons as he balances his ownership and management of the Djan Madruga Swim Club (Sistema Djan Madruga) in Rio de Janeiro – and still maintains his competitive edge and patriotic spirit for his native land.

Recently, he also participated in the successful campaign to bring the 2016 Olympic Games to Rio de Janeiro. He assisted in the planning and presentations made in Switzerland and Turkey to principals and delegates of the International Olympic Committee. “I helped with the Olympic bid preparation and the Olympics will be another revolution for Brazil. Everyone is excited and is talking about the Olympics here. When the Portuguese came to Brazil, the country experienced major changes. This Olympics will be our second major revolution. The changes will be major.”

As Djan gazed over the scenic seaside course, partly protected by a peninsula and partly exposed to the ocean swells and currents of the Pacific, he said, “Look at this. We’ll have the Olympic 10K marathon swim here as well as the triathlon here and the marathon run will pass by.”