Skip to content
Previous Next
Smell The Sea, Feel The Sky In Memory Of Burgert van der Westhuizen 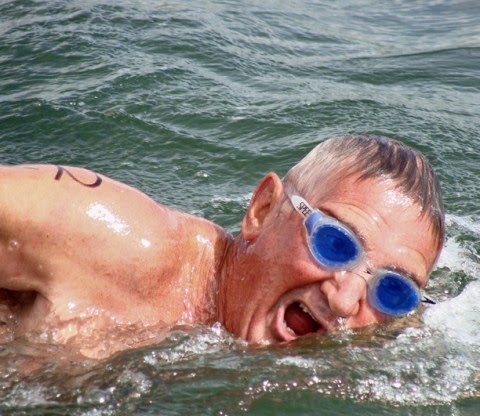 Van der Westhuizen was an experienced open water swimmer who regularly swam along the coastline of Jeffreys Bay and in the canals of Marina Martinique.

“Open water swimming is a relatively new addition to the world of extreme sports.

Swimming in just a Speedo type costume, goggles and a swim cap in any conditions and either warm or cold water is not for the faint of heart. Burgert van der Westhuizen was one of those people who found himself drawn to the challenges posed by open water swimming and was a regular in the water at Marina Martinique.

However, his first love was swimming along the coast of Jeffreys Bay. He regularly swam past the iconic surf breaks of Supertubes and the Point.

Despite not having much cold water experience, a water temperature of 14ºC (57ºF) did not deter Burgert from entering the 2012 JBay Swim Challenge, an event that started at Main Beach and ended 4 km later at the Point. It took Burgert just under 2 hours to complete the swim and despite staggering out the water at Point and having to be treated for hyperthermia afterwards, he was determined to finish the swim. He was the oldest swimmer in the water that day and he earned the respect of the entire swim community for his efforts.

I remember watching Burgert swim in the Marina a couple of years ago and thinking to myself, ‘I hope I will be swimming as strongly as him when I am in my 70’s.’ Burgert was fit and strong for his age and totally capable of swimming 3 km in under an hour. Burgert was also the only other swimmer I know who carried a thermometer with him and measured the water temperature all the time. We would chat with each other and compare our findings as we often swam at different times of the day.

The risk of a swimmer being attacked by a shark is a risk that Burget felt was minimal and that was why he swam so much off our coast.

On the day that he was attacked, the conditions were perfect for a swim with clear conditions, warm water and almost no wind. There was no indication that something could have gone wrong. The attack has devastated the swimmers and surfers of Jeffreys Bay but we take comfort in the knowledge that Burgert died doing something he loved and lived for. We are going to miss seeing Burgert in the water and his warm smile and friendly disposition.”

“Hark, now hear the sailors cry, smell the sea, and feel the sky
let your soul & spirit fly, into the mystic...” van Morrison