Skip to content
Never Ever Giving Up, The Comeback Of Richard Weinberger 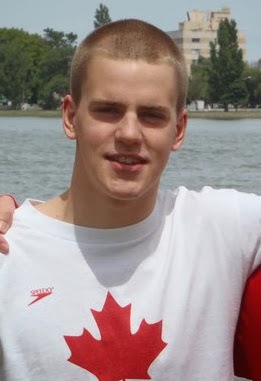 Those words mean something profound to open water swimmers pushed by the elements where nothing is guaranteed and the unexpected can be expected.

But in Barcelona at this year’s FINA World Championships, Richard Weinberger truly put meaning behind those phrases.

But the scoreboard did not record the fact that the Canadian Olympic medalist missed a turn buoy and battled back from way back in the pack after having to backtrack along the course midway through the race.

23-year-old Weinberger missed a turn buoy midway through the 10 km race at Barcelona’s Moll de la Fusta. He was forced to leave his position near the front of the pack and swim in reverse to repeat the turn. His mistake seemingly took him completely out of the mix; no way, no how was the Canadian going to get back in the lead pack. But “never give up” is truly in Weinberger’s vocabulary.

Playing catch-up by nearly the length of an Olympic pool, Weinberger battled all the way back to the front as the 66 competitors entered the final lap, winning over the crowd with his impressive comeback. “I’m pretty proud of the fact that I didn’t give up. I tried to stay cool but I knew it was a fatal mistake and I paid for it. I know I’m better than that.” As he fought back through a school of frenetic competitors, Weinberger found himself in a three-way battle for third as Spyridon Gianniotis and Thomas Lurz charged ahead. Olympic champion Ous Mellouli out-touched Weinberger for the bronze and Damien Cattin-Vidal of France took fourth by just 0.1 second.

“We’re disappointed he made a mistake around a buoy and had to make that up. That obviously cost him a little bit more energy than he wanted to put in. He still fought really hard,” said Weinberger’s coach, Ron Jacks. “It shows a lot of character. It shows that he doesn’t give up and I think that shows a lot of substance as a person for Richard.”

For his mindset and comeback against all odds, Weinberger’s 10 km effort at the FINA World Championships was nominated for the 2013 World Open Water Swimming Performance of the Year. “He unexpectedly made a fatal error during the showcase 10 km marathon swim at the 2013 FINA World Championships. Richard Weinberger was fit and ready to climb on the podium, but he inadvertently missed a turn buoy and had to swim in reverse back around the buoy in order to stay in the race. His mistake put him 70 meters back behind the world’s best swimmers. He could have quit; he could have just cruised in. But not the Canadian. His competitive zeal and pride kicked in big-time. Slowly but surely, he swam back into medal position against all odds. In the end, he just missed a medal, but made many fans and never gave up during that race. For his sense of purpose, for his spirit of competitiveness, for his valiant strategic comeback at the World Championships in Barcelona, Richard Weinberger’s race is a worthy nominee for the 2013 World Open Water Swimming Performance of the Year.“

The previous World Open Water Swimming Performance of the Year recipients include: