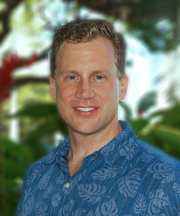 On November 30th, Dr. Steve Minaglia completed an 11 hour 10 minute two-way crossing of the Pailolo Channel between the islands of Molokai and Maui.

Escorted by pilot Paul Luuwai from Maui and paddle boarder Blair Norris from Oahu, the 40-year-old Professor at the John A. Burns School of Medicine at the University of Hawaii in Honolulu tells of his adventure that started out in the dark at 5:43 am on D.T. Fleming Beach Park, one of the most popular surfing beaches of Maui.

“In the beginning, I was so afraid. From the escort boat, I swam in pitch black alone to shore for about 200 meters. On the beach, I talked with a gentleman who was scanning the sand for metal.

He asked me what I was doing there and was very kind and encouraging. I didn’t want to leave at that point. I swam back out to Blair and Paul. Blair had a flash light in strobe mode, but it was still difficult to find him because of the shore break. This is a risk management area that deserves further evaluation.” 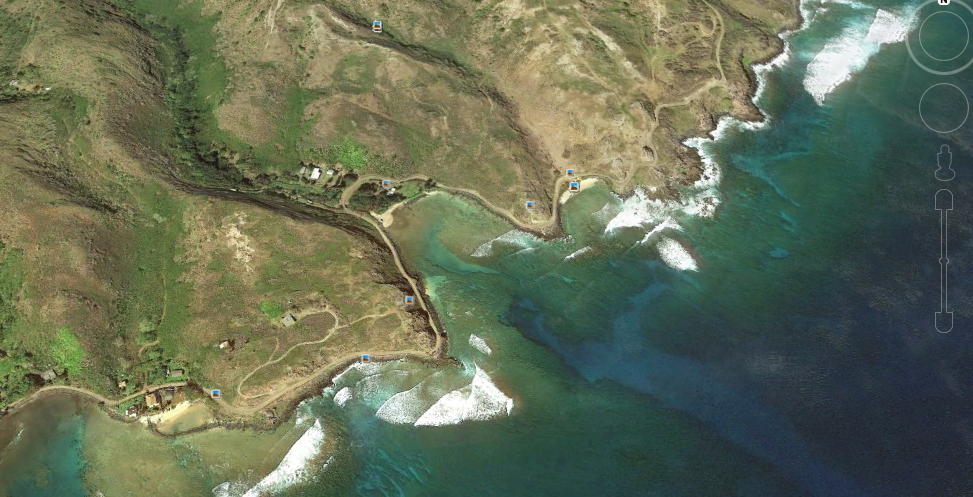 He continues to describe the first leg, “I swam to Molokai, to a surf break I believe called ‘Rock Point’ – the only break on the East side of Molokai in about 5 hours 30 minutes. After walking up to the high water mark, I got back in the water, applied some sun screen, Vaseline, and ate a granola bar. The boat was about a mile out from me, but Blair was able to paddle in behind me up to the beach.

Had I landed on the point, I would have needed to climb up rocks and fight the waves on the way out. The whole day was overcast and the sun never shined. The winds were minimal, there was essentially no surface chop, and the way heights mid-channel were about 6 feet. The conditions seemed optimal for the first leg and most of the second leg. Per the GPS, I had swam about 9.5 miles at this point. I was mainly drinking Gatorade and water and eating bananas for most of this leg. I had gotten sick and vomited around mile 4 and think it was due to trying to eat a Snickers bar.” 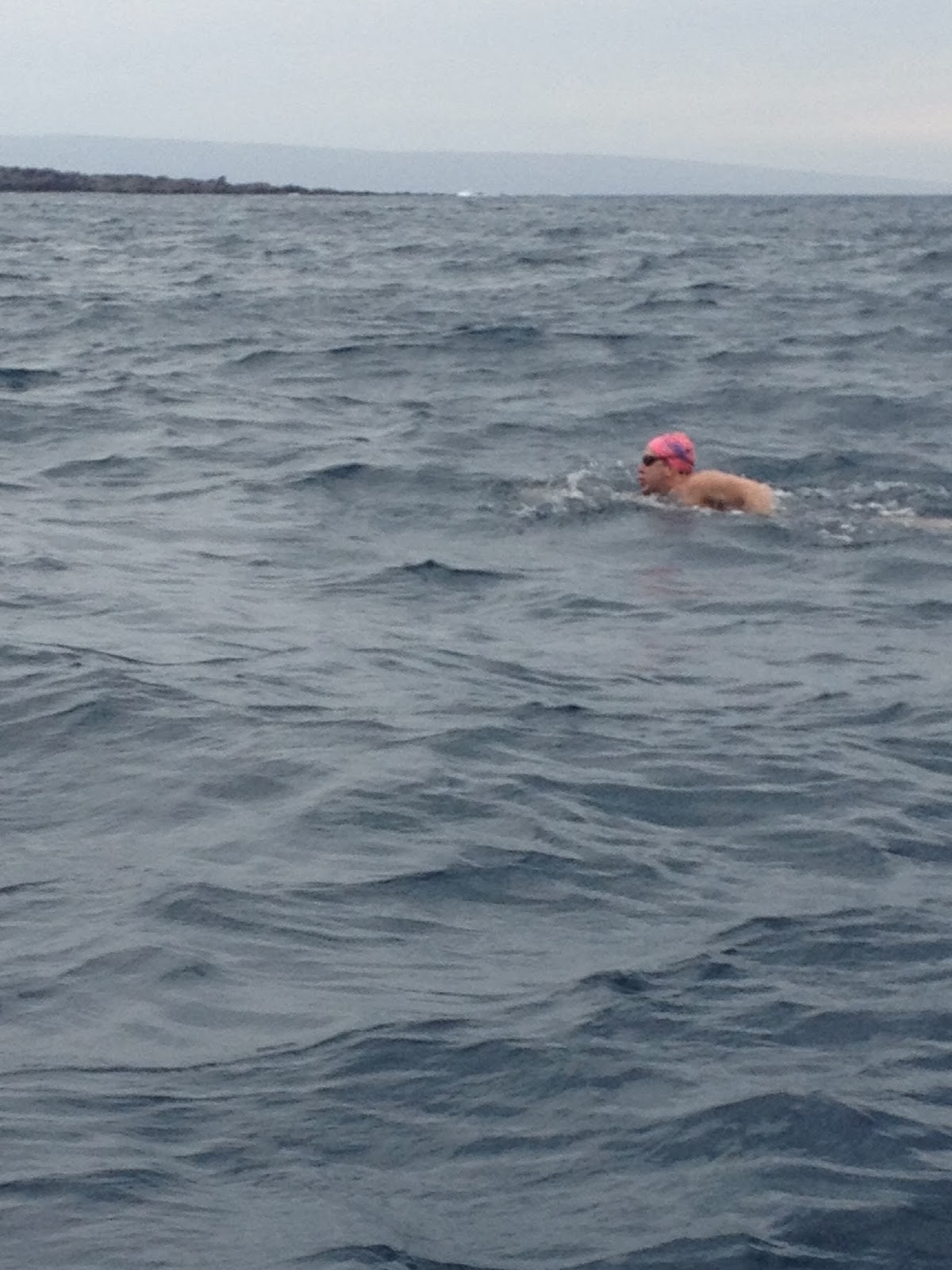 The second leg predictably was tougher, “I swam back to Maui. I told Paul it did not matter where we landed and to find the best line. Ironically, that led us back to Flemmings. I was in heaven for the first part of this leg. I got my rhythm and was cruising again at about 2 miles per hour. Once 6 miles from shore, Paul announced I had a little over 3 miles to go to get to Flemmings.

This is when the conditions suddenly worsened. Although the waves did not appear big there was a lot of shaking from side to side. Twice I was flipped over onto my back. I felt motionless and unable to stroke. Both Paul and Blair, on several occasions, assured me I was still making progress. At 4 pm I had about one mile to go. This mile was the hardest to swim. I am still not sure what was happening in this coastal zone, but I felt buried in it.”

He culminated at the beach where he started, “I walked up the shore. I really like details and focus on rules.

Because of the ‘high water mark‘ rule used in channel swimming, I so often run way up the beach because I am so afraid I might not see or actually miss the mark. I think somedays I will just climb a tree. Perhaps I take this too seriously, but I cannot imagine doing something so bold and then blowing it by violating a basic rule. Anyway, one of the videos shows this crazy propensity. 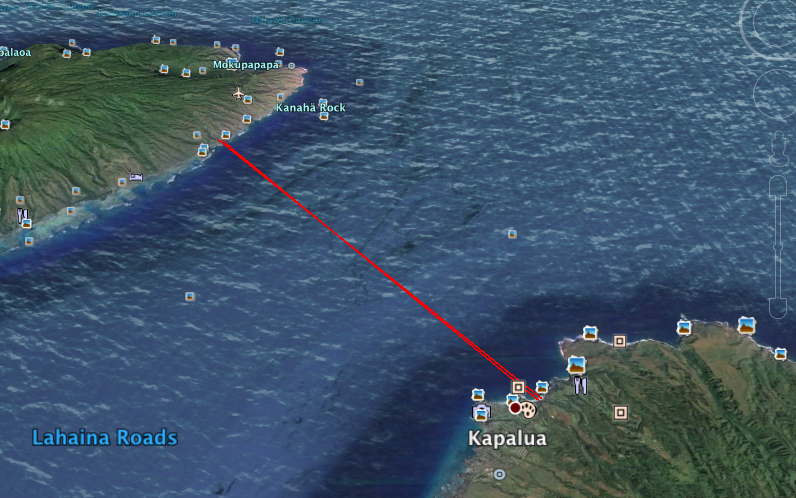 About 20 people met me on the shore many of whom were children. Some gave me water and some just shook my hand. All seemed impressed with the feat.

I will never forget the look on some of the kids faces when one of the dads explained to them what I had just done. It was very sweet to start and end with kind words from complete strangers, and despite feeling alone at times in my quest to double cross Pailolo I had the best support possible.”

Blair is an accomplished and fearless waterman. He traveled alongside me the whole swim on a one-man outrigger canoe.