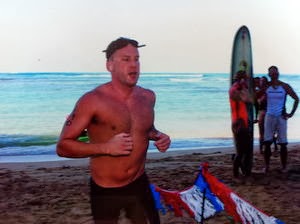 On November 30th, Dr. Steve Minaglia added another channel to his resume.

After 11 hours 10 minutes, he returned to where he started on the west side of Maui to become the first person to complete a two-way crossing of the Pailolo Channel between Molokai and Maui.

Escorted by pilot Paul Luuwai from Maui and paddle boarder Blair Norris from Oahu, the 40-year-old Professor at the John A. Burns School of Medicine at the University of Hawaii in Honolulu departed earlier that morning in the dark and completed the nearly 19-mile swim.

The active Oahu-based masters swimmer from the Waikiki Swim Club and specialist in reconstructive surgery has also crossed the 9.3-mile Kalohi Channel in 5 hours 48 minutes between the islands of Molokai and Lanai and a one-way across the 9-mile Pailolo Channel from Maui to Molokai in 2012. Dr. Minaglia has also crossed the 8.9-mile Auau Channel from Maui to Lanai in 2011 only one day after competing in the annual Maui Channel Swim in the other direction.