Skip to content
Hadar Aviram Across The Sea Of Galilee 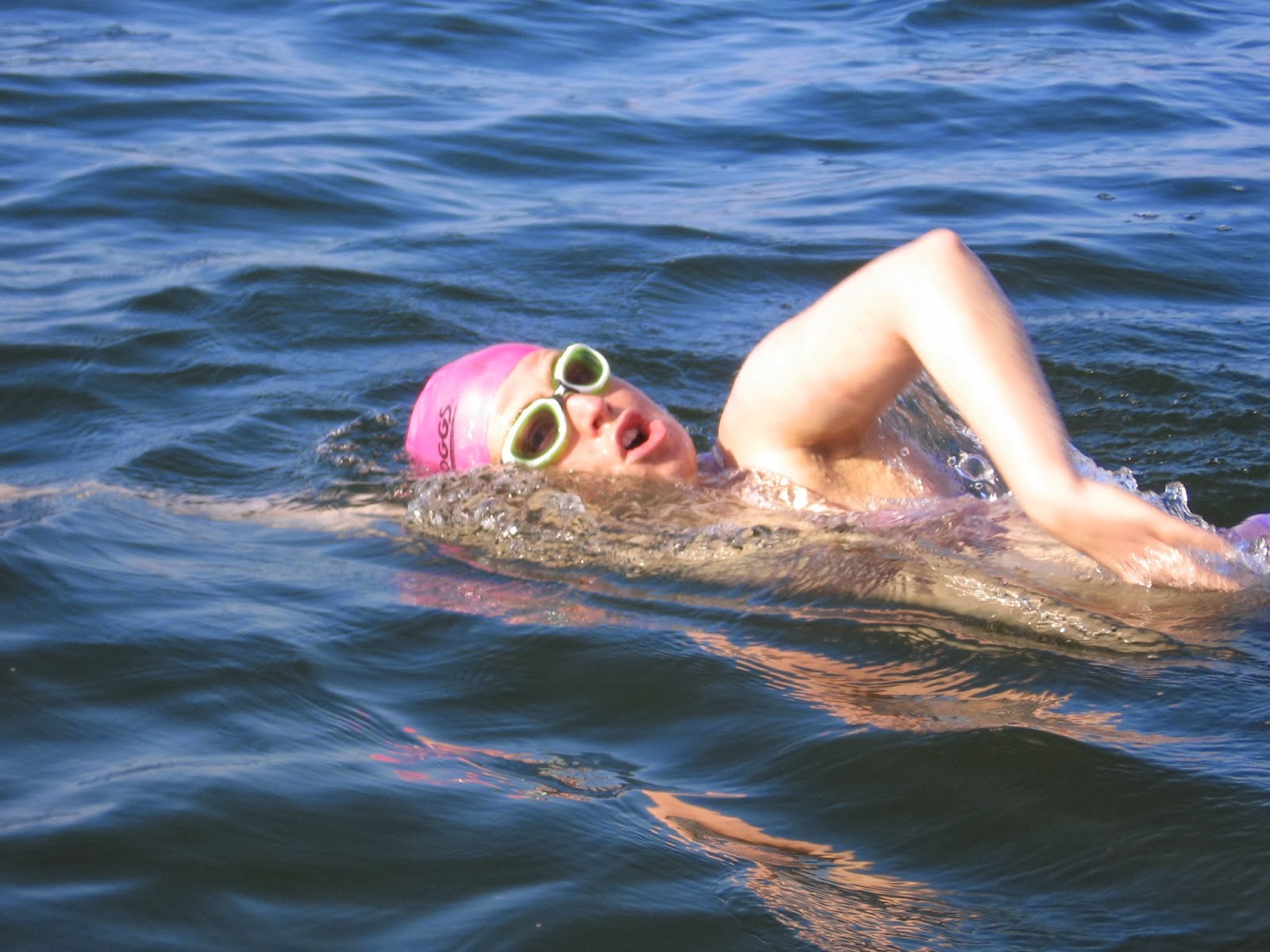 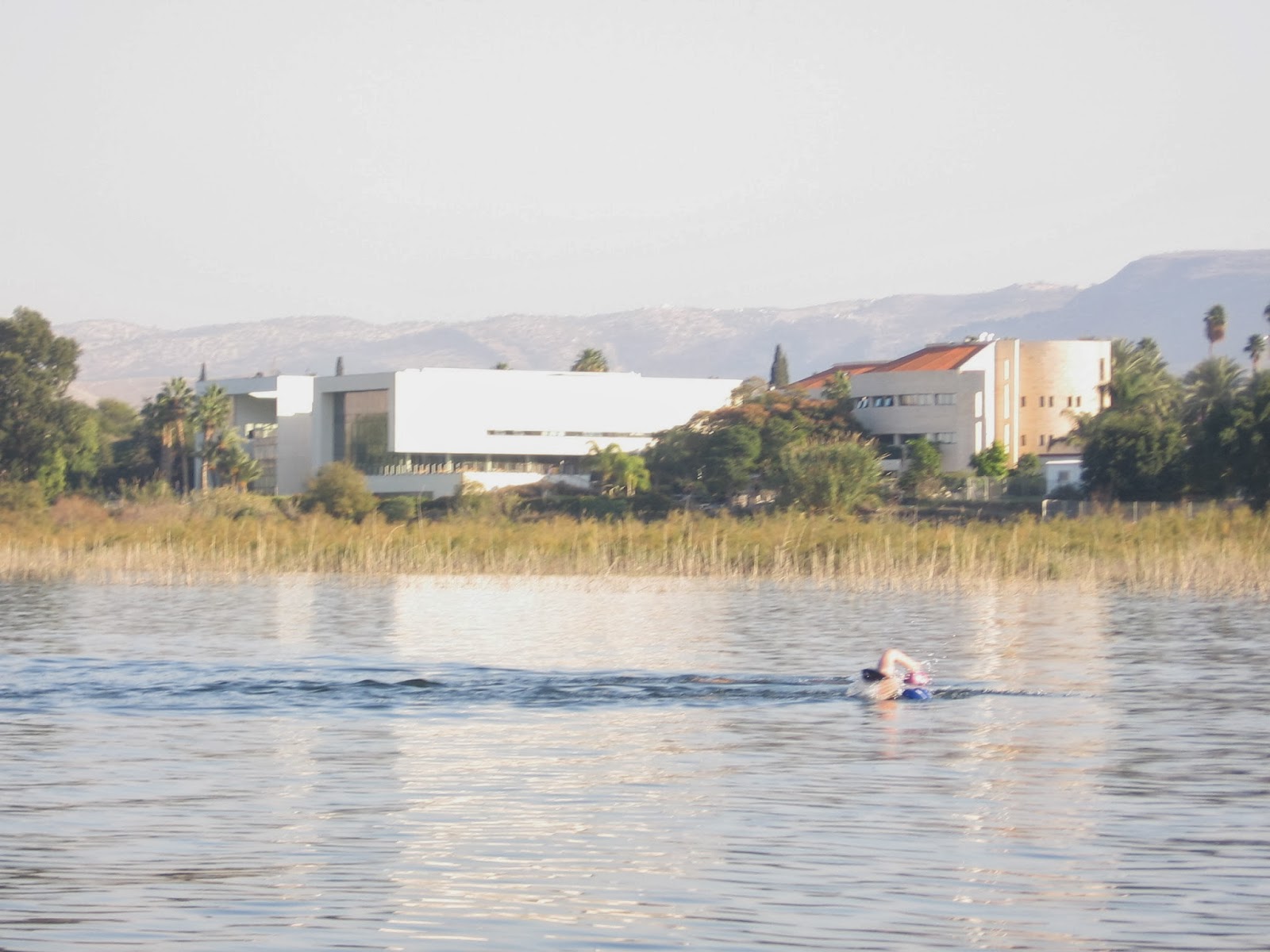 The Sea of Galilee, also known as Kinneret, Lake of Gennesaret or Lake Tiberias, is the largest freshwater lake in Israel is about 21 km (13 miles) long and at 214 meters (702 feet) below sea level, it is the lowest freshwater lake on Earth. The lake is fed partly by underground springs although its main source is the Jordan River which flows through it from north to south.

After waking up in the resort village in Kibbutz Ein Gev and motoring over to the start, she initially thought to herself, “This lake is huge,” but she was mostly was entranced by the peace and quiet as she set off in the darkness.

We asked Professor Aviram about her historic crossing that started at Amnon Beach on the north of the lake.

Daily News of Open Water Swimming: What was the water temperature and conditions (surface turbulence, clarity) of the Sea of Galilee?
Hadar Aviram: 64ºF (17.7ºC). The Sea of Galilee is a fresh water lake and was almost glassy with no currents or swells. We had a little bit of chop here and there, but the wind was favorable

Daily News of Open Water Swimming: Was the crossing was you expected it would be? What was your time?
Hadar Aviram: I estimated the time and difficulty properly, but not the temperature. A week before the swim date, Israel was hit with the worst storm it has seen in probably 100 years – lots of snow and ice. While the storm calmed down after a few days, and the sun was out, snow from the mountains melted into the lake, bringing the temperature down considerably from what I expected. At Hour Six I was feeling very cold in my lower back and my groin and consulted with my crew about ending the swim, but decided to keep going, and by the end of Hour Seven (when my pace swimmer swam with me) I was in high spirits and felt I could finish.

Daily News of Open Water Swimming: How did this crossing compare with your other marathon swims?
Hadar Aviram: Some of my previous swims included the 11-mile Portland Bridge Swim which was shorter and had a bit of current assistance, as well as more favorable water temperature. I also swam the Tampa Bay Marathon, withdrawing from the race at Mile 18 after 11 hours of swimming with a shoulder injury. The water in Tampa was much warmer, but the conditions were difficult – swells, chop, and the need to rescue survivors from capsized support boats. So this is not the longest I’ve swum so far, but it was the longest swim with the coldest temperatures.

Daily News of Open Water Swimming: What kind of permissions or approvals did you have to receive in order to conduct your swim (i.e., did you have to ask for the permission of any government agency)?
Hadar Aviram: Since the crossing was a solo swim, I didn’t have to get any approvals from the coast guard or from the municipalities around the lake.

Daily News of Open Water Swimming: How many people have done this crossing before (if you know)?
Hadar Aviram: A couple of years ago, a group of Israeli swimmers crossed the lake during the summer in the opposite direction from north to south. My pilot also piloted for them and says that despite the big difference in water tempertures, my swim was faster partly because I was swimming under channel rules, did not touch the boat, and kept my feedings short.

Daily News of Open Water Swimming: How did you train for this swim?
Hadar Aviram: I did mostly pool training, averaging 25 km a week in the last three weeks before taper. The longest I swam in the pool for this crossing was 10 km, combining long swims and sprints. I also swam in San Francisco Bay at Aquatic Park before the temperatures dropped below 55ºF (12.7ºC).

Daily News of Open Water Swimming: Did you see anything under the surface of the water?
Hadar Aviram: We started the swim in the dark at 5 am, but since it was a freshwater lake, there was no bioluminescence. The water is clean. It is the source of Israel’s national water carrier, but not clear, so I couldn’t see any marine life. I do know there are plenty of fish in the lake.

Daily News of Open Water Swimming: You had a pace swimmer. Was she local or come with you from California?
Hadar Aviram: I had one pace swimmer, Lisa Galfand-Trudler, who is a local Israeli endurance athlete. She swam in one-hour stretches at a time, taking an hour-long rest between swims. I swam the first two hours alone before sunrise.

Daily News of Open Water Swimming: Did any people from Beth Dror participate in the swim in any way?
Hadar Aviram: The good folks at Beth Dror heard about the swim two days before it was scheduled to happen. They had the link to my SPOT Tracker page and the youth at the shelter followed our progress online. They also publicized the swim on Facebook and were very excited and grateful. One of the happiest outcomes of the swim was that my pilot, Lior Eliyahu, who has a wakeboard/wakesurf business on the lakeshore, graciously offered all the youth in the shelter a fun day on the lake at his expense during the summer. The US$2,640 in donations raised through the swim will help the shelter continue its mission to provide Israel’s only home and refuge for homeless GLBT youth. 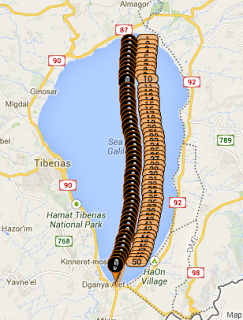 Daily News of Open Water Swimming: How did you select your pilot?
Hadar Aviram: Lior Eliyahu is a local waterman who lives and works on the lakeshore. He is extremely knowledgeable with regard to winds, currents, and accompanied the group swim conducted two years ago. The person who organized that swim (Three Days In Three Seas), Gadi Katz, the TI head coach in Israel, recommended him, and we’re now good friends.

* Bill Welzien attempted and completed a 10 hour 25 minute crossing of the Sea of Galilee on September 2nd 2009, but as he stood up in the shallow water and was walking ashore, he nearly fell and his friend touched him to steady him against falling against the rocks in the shallows.

Because Welzien had not completely cleared the water, Welzien’s swim is not considered a standard crossing under the Marathon Swimmers Federation rules.