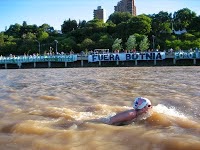 The last race in the Quini 6 series and the second race on the FINA Open Water Swimming Grand Prix circuit is the 88 km (54.6 miles) Maratón Hernandarias-Paraná race.

Although it is a downstream river swim, it is technically the longest professional race in the world in terms of distance. Former world champion and American marathon swimmer Erica Rose, who finished third in 9 hours 40 minutes in 2007 and sixth in 10 hours 5 minutes in the 2005 Maratón Hernandarias-Paraná, recalls her experiences.

“The race itself is incredible. It is challenging, for sure. There are some points when the river is narrow and you feel like you’re moving quickly, but there are other points where you can’t see either bank of the river at all and you have no idea where you are or if your rowers are taking you in the right direction.”

“The people in Parana and Hernandarias are amazing. They get so excited about the marathon that they celebrate the week leading into it and line the banks of the river when you’re swimming. They’re incredibly supportive of the swimmers and treat us like celebrities.”

Photo of Erica Rose swimming in the Maratón Hernandarias-Paraná.