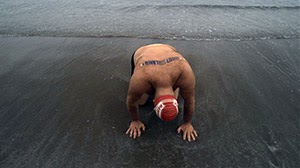 It is a film produced by Red Bull Media House that documents Stephen Redmond’s question to become the first person to achieve the Oceans Seven.

“There are seven ocean passages that ultra open water swimmers dream of crossing. After the English Channel, Catalina, Gibraltar, Molokai, New Zealand’s Cook Strait, and the Irish Sea, our hero’s last and coldest, is Japan’s Tsugaru Strait between Honshu and Hokkaido. Marathon swimmer Stephen Redmond attempts to conquer this most difficult passage and be the first to complete all seven.”

The trailer is here.