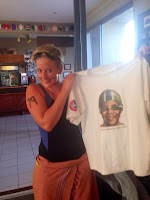 Those Who Conquer Fear

Zani Miller, an English Channel aspirant from South Africa, holds up a shirt featuring the likeness of Nelson Mandela. The shirt is being offering by Ram Barkai as a fundraiser for his upcoming Antarctic Circle Ice Challenge.

Mandela once said, “I learned that courage was not the absence of fear, but the triumph over it. The brave man is not he who does not feel afraid, but he who conquers that fear.”

Although Mandela was not directly involved in aquatic sports, his quote seems to sum up the challenge and motivation for many who venture beyond the shore.