Skip to content
Previous Next
Bali To Java, An American Favorite 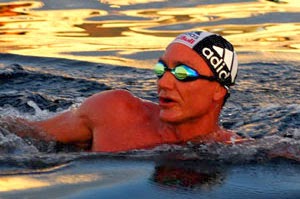 Back in the 1990s, four Americans swam the 3 km between the closest points between Bali (northernmost point on White Beach) to Java.

After two Americans crossed in 1996 in 2 hours, International Swimming Hall of Fame Honor Swimmer David Yudovin had set the record in 1 hour 36 minutes in 1997. But then Monte Monfore made his first attempt at a charity swim for causes in July 1998.

It was to set off a decade of goodwill swims.

The then 37-year-old water polo player and ocean swimmer from Hanford California describes how he did it. “A sailor and a surfer advised to make the swim on the half moon as this would be the period of least tidal movement. I decided that the swim should be made before the windy season, but at a cool time when I would not experience body overheating. I estimated from Bali to the closest point on Java was 3 km and the swim would take 45 minutes to 90 minutes.”

He sure was. Monfore swam between the two islands in 38 minutes. His rapid crossing set in place another decade of charity swims on a variety of causes.