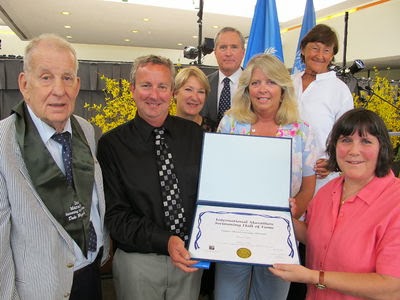 He is never alone and his efforts are never about himself.

After decades of volunteering and donating his money to support the sport of open water swimming, New Jersey’s Dale Petranech was selected for enshrinement in a special election by the International Swimming Hall of Fame as an Honor Open Water Swimming Contributor. Petranech will join the pantheon of other aquatic greats including the following individuals in the Open Water category:

Not only did Petranech join the Half Century Club for his crossing of the Catalina Channel, he has contributed to the sport in myriad ways. He is the long-time Honorary Secretary of the International Marathon Swimming Hall of Fame and started the 1-Hour Postal swim in 1978 (currently branded as the Speedo USMS 1-Hour Postal National Championship).

Petranech’s wealth of information and global networks in the open water swimming community is one of the most impressive in the world of aquatics.

Throughout the decades, he has provided the administrative background, expertise and efforts to maintain the records, rules, policies, procedures and protocols used in the sport at the USA Swimming, local age-group and masters, and FINA levels. He is a lifetime member of the Catalina Channel Swimming Federation and is the Eastern Zone Open Water Swimming Zone Representative for USA Swimming. “His historical records and recollections of the sport are priceless,” explains Steven Munatones. “He has an encyclopedic knowledge of what happened by whom when and where regarding open water swimming on various levels since 1977. His work has spanned everything from U.S. Masters Swimming and USA Swimming to FINA and the International Marathon Swimming Association.”

Among his body of work, Petranech has accomplished the following:

Bruce Wigo of the International Swimming Hall of Fame summarizes his accomplishments, “For the past 35 years, Dale has been a leader in, and advocate for, open water, long distance swimming and has worked to organize open water swimming competitions in the United States and around the world. He accepts every challenge head-on and is well respected internationally for his work. He began in 1977, as a chairman for AAU National Long Distance Committee, of which only one race existed annually – the 4-mile for men and 3-mile for women, both swum around a quarter mile cable stretched in the water.

As committee chair, his first priority was to increase the number of meets attended by U.S. athletes, both nationally and internationally, whereby he secured U.S. athletes to compete at Lake Windermere, the first time any swimmers officially represented the USA overseas. With the help International Swimming Hall of Famer Ross Wales, Dale helped create United States Open Water Inc., when the AAU was required to relinquish its administrative control on the sport, opening the potential to access more concentrated efforts on long distance swimming’s behalf within the U.S.

For a short period of time, the organization was separate from all other organizations. As Chairman of the committee, Dale was responsible for both USS and USMS open water, long distance swimming. As a member of the DC Masters Swimming Club, Dale organized and participated in the first-ever, one-hour swimming-for-distance postal meet where results are sent to a central location for tabulation. This new concept has grown to include thousands of participating swimmers today. In 1992, with Dale’s urging, FINA President Bob Helmick agreed to study adding open water swimming to the Olympic program. Dale became Chairman of a newly appointed FINA Commission to study adding Open Water Swimming to the FINA and Olympic Games programs and to develop rules and procedures to help make it happen.

This led to the formation of the FINA Technical Open Water Swimming Committee with Dale serving as Honorary Secretary, responsible for setting the agenda. During his terms on the Committee and FINA Commission, he helped write the accepted and standard international rules using the 25 km race as a standard distance. Guidelines were taken from the rules of the British Long Distance Swimming Association, Channel Swimming Association and United States Swimming Long Distance groups. He stressed a 25 km race be held at each World Championship (first one in Perth in 1990) and pushed for a FINA Marathon World Cup in Olympic years, the first one from Lausanne to Evian France on Lake Geneva in 1988. In 1984, he helped to host a Catalina Channel International and a 15 km Huntington Beach to Seal Beach attended by Great Britain, Czechoslovakia, Egypt and the USA.

During his tenure as Honorary Secretary of the FINA Technical Open Water Swimming Committee, he served in many capacities internationally as an event official from Clerk of Course to Assistant Referee to FINA Special Observer. He has presided over many FINA Open Water Clinics, and has been the lead official at the USA National Open Water Championships and the 2000 FINA World Open Water Championships in Hawaii. He served on the organizing committees for the first few Manhattan Island Marathon Swims and the FINA Around Absecon Island (Atlantic City) swims.

From 1994 to 1996, Dale was the Chairman of the National Aquatic Coalition, an organization to bring together all organizations relating to aquatics, for mutual understanding. As secretary of the International Marathon Swimming Hall of Fame when Commander Gerald Forsberg died in 1998, Dale assumed his position as Honorary Secretary of International Marathon Swimming Hall of Fame where has admirably performed all the duties of this position including formalizing the ballot for the IMSHOF Induction. He developed and organized the first IMSHOF Induction Ceremony for this organization that began in 1963.

In 1985 at the age of 50 he became the oldest person to swim the 20-mile Catalina Channel. In order to preserve marathon swimming history, Dale is working to publish the personal files of World Professional Marathon Swimming Association administrator, now deceased, Joe Grossman.”

Dale Petranech is shown above with members of the Catalina Channel Swimming Federation at the 2011 International Marathon Swimming Hall of Fame induction ceremonies at the United Nations in New York City together with Penny Dean, John York, Linda Bamford, Paula Selby, David Clark and Carol Sing. Photo by Skip Storch.