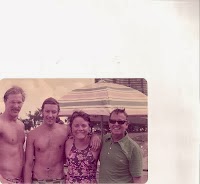 During that period, a number of well-qualified and renowned open water swimmers were nominated and will be so honored over the next 3 years.

The International Swimming Hall of Fame has authorized a special selection for these great open water swimmers:

Two Floridians, Sandra Bucha of Bradenton and Jon Erikson of Boca Raton will be enshrined at the 2014 ISHOF Induction ceremonies on June 13th – 15th in Fort Lauderdale, Florida as Honor Open Water Swimmers. A special ISHOF Induction ceremony will be held on September 20th – 21st at the 2014 Global Open Water Swimming Conference in Glasgow, Scotland to honor and to enshrine Plit, van Berkel-de Njis, Yudovin, Gleitze, Young and Petranech.

Bucha and Erikson will join 13 other athletes, coaches and contributors from the FINA-governed aquatic sports into the ISHOF Class of 2014 from 8 nations, including Grant Hackett from Australia, Agnes Kovacs of Hungary, Tom Malchow of the USA, Peng Bo of China, Penny and Vicky Vilagos of Canada, Carlo Silipo of Italy, Karen Kuipers of the Netherlands, coaches Charlotte Davis of the USA, coach Jozsef Nagy of Hungary. Bruce S. Hopping of the USA, Norman Sarsfield of Great Britain and Chuck Wielgus of the USA will be honored as Contributors to the sport.

Bruce Wigo, President of the ISHOF, explains Bucha’s honor. “Before pools became commonplace, humans swam exclusively in the open water. By the end of the 19th Century, marathon or open water swimming competitions attracted what many in the “amateur” athletic and Olympic movements considered a disreputable class of professional swimmers. Thus it was rare that a pool swimmer would cross-over from the “amateur” pool to the open water and impossible for the revers. This year, ISHOF will honor two swimmers who helped pave the road for open water to become recognized as an Olympic and World Championship event.

Historically, open water swimming was professional. Other than the likes of Norman Ross, Gertrude Ederle, Greta Anderson, there were few if any world-class pool swimmers who participated in the open water marathon races – until John and Sandra. While it was many years in the future, I believe that these two started the long journey of respect for open water swimmers in the eyes of FINA.

Rather than retire from swimming after her high school days in Hinsdale, Illinois, as was the case with most female American swimmers in the pre-Title IX era, Bucha joined the male-dominated professional marathon circuit and competed against the men, mano-a-mano. In the 9 marathon swim races in which she competed in between 1973 and 1975, Sandy finished first in the female gender, undefeated in every race. Only once did she come in third to male swimmer and every other swim she finished a close second to the first male swimmer, usually her high school teammate and Hall of Fame swimmer, John Kinsella.

As her Hinsdale coach Don Watson pointed out, “If John were not of her era, she would have won five professional marathon swims outright.” In partnership with Kinsella, Sandy and John twice won the 24 Heures La Tuque, the incomparable non-stop relay that showcased the ultimate one-two punch from Hinsdale.”

Bucha not only joins her high school and professional tandem partner Kinsella in the Hall of Fame, but her brother Paul “Buddy” Bucha, is a recipient of both the Congressional Medal of Honor and ISHOF’s highest recognition, the Gold Medallion Award. 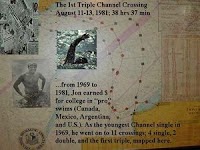 Wigo explains Erickson’s honor. “In 1969, when he was just fourteen years of age, Jon made headlines around the world as the youngest swimmer to successfully swim across the English Channel. Twenty-two years later he set another milestone by becoming the first to do a triple crossing of the same Channel, a feat only two others have accomplished since. In between he garnered numerous laurels on the professional marathon circuit.”

He was inducted in 1981 as an Honour Swimmer in the International Marathon Swimming Hall of Fame where he joined his father Ted. Jon first swam from France to England in 1969 as the youngest swimmer and did a two-way crossing in 1979 where his first leg as the fastest crossing of the year. He later did two English-to-France crossings in 1980 and did many professional marathon swims in Mexico, Argentina and Canada including five Traversée Internationale du lac St-Jean, three 24 Heures La Tuque and races in Chibougamau, Hamilton, Pasbebiac and elsewhere. He is also a member of the 24-hour Club for swimming 36.75 miles (59 km) in Lake Michigan from Michigan City to Chicago, Illinois in 1971 in 24 hours 30 minutes.