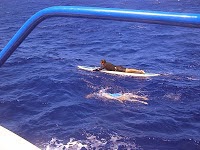 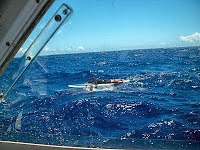 The swimming community continues to evolve and improve. The open water swimming world continues to imagine and achieve different and difficult swims at multiple levels.

Their achievements remind us of the words of Harvard University president Drew Faust who wrote, “The study of the humanities enables students to imagine, adapt, assess, interpret, change and create.” She explained that the “interpretation, judgment and discernment are cultivated and refined by the humanities. Students learn how to think critically and communicate their ideas clearly, and those transferrable skills lead to rewarding lives and careers in every field of endeavor.”

Another Harvard President Charles Eliot noted in 1869 that “an observant, reflecting, and sensible man, whose mind is not only well stored, but well trained also to see, compare, reason, and decide.”

Their writings remind us of similar observations seen among open water swimmers.

Many open water swimmers demonstrate boldness in doing and thinking, especially when these swimmers attempt unprecedented swims in lakes, rivers, seas and oceans. Their solitary and relay efforts help lead to new expressions of human endurance and more comprehensive understandings of human’s physical potential and the marine environment.

Swimmers who cross channels, circumnavigate islands, and traverse lakes for the first time face dynamic circumstances that requirement a balance between athletic dreams and physical resilience. During the planning stages, they weight myriad possibilities, think of different solutions, and make assumptions of their swimming speed and acclimatization to the conditions.

Among the innumerable swims that have yet to be completed, there are many massively difficult swims whose success will require the ultimate of athletic performance, favorable water and weather conditions, flawless navigation, and a minimal presence of marine life.

One example is the swimming the 72 miles across the Kaieiewaho Channel between the Hawaiian islands of Oahu and Kauai. First attempted by American Jonathan Ezer, an early Molokai Channel swimmer in the 1970s, it was also attempted twice by Australian Penny Palfrey in 2010.

Not only is the distance (115.8 km) a monumental challenge, but traversing the rough waters of the 10,890-foot (3,319 m)-deep channel in the middle of the Pacific Ocean is daunting. Swimmers will have to face the damaging effects of salinity inherent in the Pacific Ocean over the estimated 35 to 50 hour swim. Besides the tropical sun of the day, swimmers face the dusk-emerging presence of stinging creatures (box jellyfish and Portuguese man o war) and ever-scary lurking of apex predators (tiger and great white sharks).

Swimmers attempting the Kaieiewaho Channel face at least one full night of swimming and possibility two nights – both possibilities (probabilities) to encounter extraordinarily venomous creatures. The massive movement of water in the channel, both below and on the surface, will dictate that the swimmer will face tens of thousands of arm strokes through undetermined turbulence and tides with most likely lateral currents running counter to their desired course.

But just as swimmers of yesteryear had not dreamed or completed a double crossing of Lake Tahoe or Lake Memphremagog, or circumnavigations of Catalina Island, or traverses from the Farallon Islands, or Ice Miles completed in the Southern Ocean, there will be someone who ultimately solves this Kaieiewaho Channel puzzle.

They will need luck and skill, physical prowess and mental toughness, expert navigation and good luck in regards to the weather, water, winds and marine life. But it will be done. If not this year, then next year. If not in this generation, then the next one. For swimmers can see, dream, plan, and do.