Skip to content
Supermen Swim Past Icebergs, Orcas At Bottom Of World 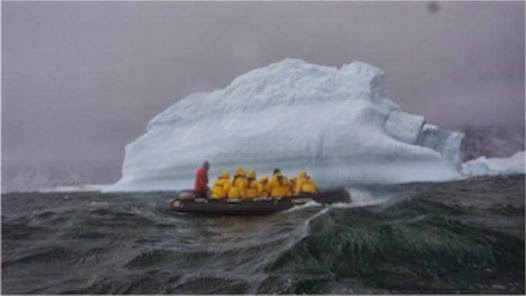 Supermen Swim Past Icebergs, Orcas At Bottom Of World

Barkai and crew have done swims all over the world including this week’s Antarctic Circle Ice Challenge. While concerns reign and logistics are always an issue, they have always achieved their goals. For a 100% success rate in ice swims around the globe, these men are more than good. They are more than lucky.

Henry Hartman’s quote – “…success always comes when preparation meets opportunity…” – comes to mind when the South Africans take to the world’s lakes, oceans and bays to do ice miles. Defined as swimming one mile in water temperature under -5ºC (41ºF), the men had plenty of runway to spare when the water dipped down to -1ºC (30.2ºF).

But the superheroes are still human with all the concerns that come with facing an unimaginable inhuman aquatic environment in the Antarctic. As Barkai describes via Facebook, “All of us have had our turn in the Antarctic waters. Ryan, Ram and Kieron swam yesterday 7 am in Neko Harbour. Andrew, Toks and Gavin swam in the evening at Paradise Harbour. Extremely poor weather, safety concerns and a tight ship schedule causing the most delays for the past 8 days of cruising. A complete mentally draining rollercoaster, with the team mostly confined to cabins, early nights in a battle to avoid the bar and at least two swim times allocated per day, so on constant standby! There are lots of great stories and wonderful pictures, which we will update when we get back to civilisation. Leopard seal chasing the first group of swimmers from a distance, orcas appearing straight after the end of the swim, bashing ice boulders through our swim, and icy cold water at -1ºC. But, in the meantime, we are all safely recovered, tired and very appreciative of the support from back home. Now its time to take in this beautiful otherworldly place.”

Follow the thoughts of the team of ice swimmers who swam to raise money for with the Southern African Sustainable Seafood Initiative and the SEAL Open Water Swimming Trust. After a rough Drake Passage crossing, Barkai explains, “you can not describe the cold here and every meter of water is littered with sizable chunks of ice or icebergs – not swimmable…“

But it ultimately was.