Skip to content
The Legendary Laura Val Rethinks What Is Possible 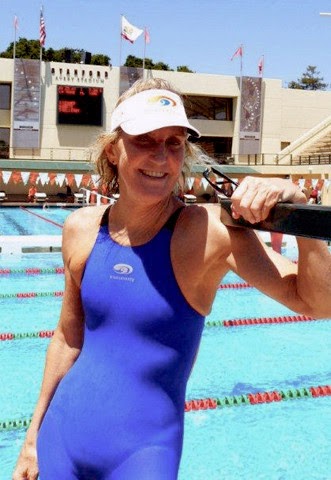 The legend of Laura Val is well-known in the global masters swimming community. But her mind-shifting, epoch-making approach to swimming improvement over one’s lifetime bears telling.

Val grew up in Mountain View, California and realized success early. She made two USA Olympic Swimming Trials, a USA Swimming National Team and was world-ranked in the 100m and 200m butterfly.

“I swam for the Mountain View Dolphins until I was 17 which was the oldest you could be on that team. Then I went to Foothill College and swam for the Foothill Aquatic Club under coach Nort Thornton until I turned 21 and retired,” she explains.

Once retired, Val did what former competitive swimmers did: went on with their lives. “My 20’s were spent becoming a registered nurse, starting my career, getting married, and having 2 children.”

But then Val discovered something that would forever change her life. A friend told her about masters swimming.

“I discovered masters swimming in my early 30’s. It renewed my passion for training and competing. I feel a little cheated that I never had the college swimming experience. It seems to be a special bond that I missed out on.”

Into her 30’s, 40’s 50’s and now 60’s, Val has utilized her undying passion into unprecedented swimming. “I have never slowed down. It is an important part of my life. It is my normal. It is my routine. I can tell you with certainty it is not because I didn’t achieve success as a youth, not trying to prove anything to anyone, not doing it so I can eat junk food, I’m doing it because I love to swim. Period.”

So while she grew up swimming against Karen Moe, Lynn Vidali, Debbie Meyer, Lynn Collela, and Jane Swagery, legends of the 1960’s and 1970’s and training mega yardage, she has completely upended what swimmers can potentially do in the water as they age. “It was not unusual for me to go 20,000 meters in a day, 6 days a week. Today I rarely go over 5,200 per day. I average 6 days a week and go between 4,600 and 5,200.”

“I am swimming so much smarter today than when I was a kid trying out for the Olympics. I didn’t understand taper or pace or breathing patterns like I do now. For me it took 20 or 30 years to really learn how to swim right. I swam the 1968 USA Swimming Olympic trials in the 100m butterfly and did somewhere around a 1:07. At age 40, I did a 1:05.”

What is possible? A world-class athlete, one of the fastest swimmers in the world in the 1960s in her teenage years, swimming faster as a 40-year-old.

But it was not only in one particular event that she improved. All of her best times performed during her teenage years were surpassed as she matured, worked full-time and raised children. “As a kid I never broke 56 in the 100-yard freestyle. At 49, I did a 53.2. I was never able to break a minute in the 100-yard butterfly as a kid, but I broke a minute at the age of 35, 40, 45 and 50.”

Her constant improvement and comparison over the decades is telling and indicative of what can be possible. “When I was 55, I did a time in the 200 free that got me fifth at USA Senior National Championships when I was 19 years old. I would say between the ages of 40 and 50, I did my lifetime bests in every event, so I guess that’s when I peaked.”

But Val continues to set age-group records and help others re-think what is possible.