Skip to content
Previous Next
Sonar Safety System For Swimmers 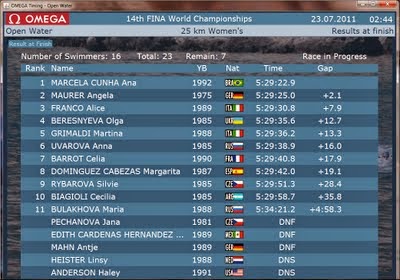 At the 2011 FINA World Championships in Shanghai’s Jinshan City Beach, FINA introduced high-tech sonar equipment from Japan as a means to keep athletes safe in the open water swimming championships.

FINA invested US$300,000 in two sonar units that were used for the first time, sweeping the course every 20 seconds to alert rescue boats if any competitor falls below the surface of the water to a certain depth.

In the case that a swimmer goes under the surface of the water, the sonar safety system alerts a team of scuba divers who are immediately transported to the area by power boats where the athlete was reported. Because the water clarity is minimal due to heavy silt at Jinshan City Beach, the new Japanese fish finder equipment was a key element of the overall safety program.

The equipment sat aboard a boat in the middle of the course. The sonar monitors utilized standard fish-finder equipment that followed the swimmers as the packs swam around the course, continuously scanning the course. Dennis Miller, a FINA board member and long-time open water swimming official, explained to AFP, “If we do have an issue with someone going down, we can pick it up by the colour of the screen.”

“If something happens and a swimmer goes down, they can find him immediately,” said Germany’s open water head coach Stefan Lurz who was at the race in Dubai when American Fran Crippen tragically passed away.

The key is speed. Speed to identify a swimmer in distress and speed to initiate and complete the rescue. This is why many rescues in open water swimming competitions are initiated by other swimmers in the proximity. “The key importance is making sure that we have the safety procedures to make sure that if athletes get into trouble, there’s a quick response,” said Pierre Lafontaine, formerly the head of Swimming Canada.

Image above shows the final results of the women’s 25 km marathon swim won by Ana Marcela Cunha of Brazil.