Skip to content
Previous Next
The Success Of Team Dire Straits 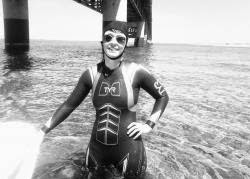 In September 2007 across the Straits of Mackinac, 50 swimmers celebrated the 50th anniversary of the Mackinac Bridge between Michigan’s upper and lower peninsulas with another 50,000+ thousand colleagues.

The 50 members of Team Dire Straits raised over US$58,000 for Mentor Michigan in a charity swim organized by Jim Dreyer and conceived by Michigan Governor Jennifer Granholm.

As part of the Governor’s promotion for physical fitness and held in conjunction with the annual Mackinac Bridge Walk led by the Governor, Team Dire Straits was cheered on as they swam in 6 groups by over 50,000 people who were concurrently walking on the Mackinac Bridge.

“Out on the Straits, there is so much time to think,” recalled Kellie Nightlinger [shown above] who has also completed five 4-mile swims across the straits over her career.

“It is incredible, everything about the bridge,” described Dreyer. “It really is an architectural marvel, not only for the state, but for the country, and when you are on a long swim, believe me, it is great to have something like that to look at.”