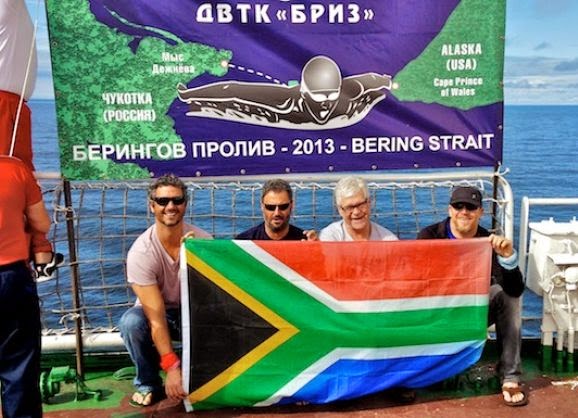 It also sponsors a Night Jar Adventurers of the Year award in South Africa. Given the adventurous spirit, the hardened physicality, and tough mindset of the South Africans, eight groups of nominees represent a vast span of human achievement in myriad sports and adventures. Not surprisingly, six open water swimmers were nominated for their exploits.

The nominees include Ram Barkai, Toks Viviers, Ryan Stramrood, and Andrew Chin for their participation in the Bering Strait Swim, an unprecedented relay stage swim from Russia to Alaska. 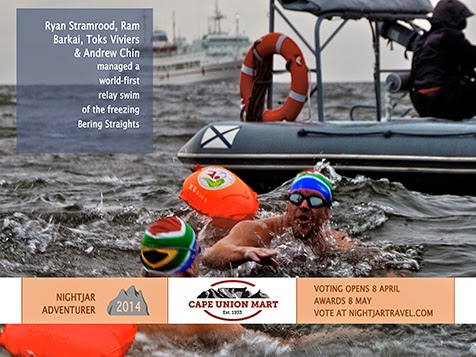 The renowned South African ice swimmers played an instrumental part in the team of swimmers from 16 countries and 15 regions across Russia who came together for the 6-day 86 km relay in 2.5-10°C water across the Bering Strait from Cape Dezhnev, Russia to Cape Prince of Wales in Alaska, USA.

Via Big Diomede and Little Diomede Islands, the team overcome storms, thick fog, currents, and freezing temperatures in what we believe was the highest risk open water swim in human history.

“It’s phenomenal that open water swimming features again on such a huge list of adventurers,” commented Nuala Moore, a fellow ice swimmer and member of the Bering Strait Swim. “For us [in the ice swimming community], the South Africans have lead the way in adventure, offering us a vision, but they always keep the reality right up there. I’ve shared so many journeys with them and they’re worth so much.”

Jonno Proudfoot and Thane Williams were also nominated for their 459 km stage swim from Mozambique to Madagascar. As outlandishly adventurous was the Bering Strait Relay in the north Pacific Ocean, Proudfoot and Williams’ 24-day swim across the Mozambique Channel was also visionary and ambitious.

Online voting for Jonno Proudfoot and Thane Williams is here.