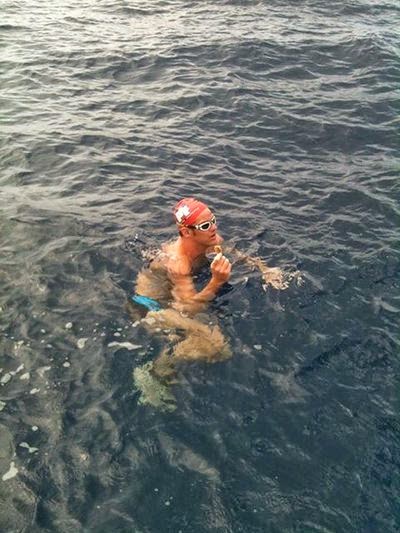 “Morning ocean races were followed by water polo tournaments throughout the summer,” recalls Steven Munatones of his aquatic upbringing in Huntington Beach, California. “If you were into both sports, California is a great place to compete in both. Of course, it required a bit of stamina so our coach Jon Urbanchek really worked us out in the double workouts during the week.”

Water polo players develop a combination of skills that are transferrable to open water swimming. “From being able to eggbeater (tread water) well to accepting physicality, from head-up swimming to expecting the unexpected, water polo is an outstanding sport for a young person to play that can prepare them well for competitive and solo open water swimming later in their lives.”

Ned Denison, one of the most famous marathon swimmers in the world and a former water polo goalie, agrees, “Playing water polo is great background for open water swimming in several regards. First, you can eggbeater to feed – keeping your head well clear of the waves, confident that your steady leg motion will not cause a cramp. Second, looking up is natural. Finally, there has been known to be a little contact in water polo – so running over a slower swimmer in a race is no reason to stop.”

Adam Walker, a former British water polo player on track to complete the Oceans Seven, sites various benefits of water polo in open water swimming. “There is the fitness and stamina required. Tracking your opponent, swimming up and down the pool. Waiting for the break and sprint off your man. You are having to do constant sprint sets and with no real rest. It is very similar to the training I’ve done for the Oceans Seven to increase my stamina. In addition, you develop a very strong eggbeater which is required in defense, aiming to get shoulders and waist out of the water to block an opponents shot or alternatively to maximise your own attacking shot.

I have also played in goal and I use to train by rolling the ball up the side of the post and across the cross bar so I can be strong getting out of the water for a shot. This has helped me on my channel swims as there have been times on feeds where I’ve had to push myself high out of the water to get a drink as the waves have been rolling high over the top of me.”

Video below shows a young water polo player being tested for his eggbeater skills with PoloMetrics by Steven Munatones: