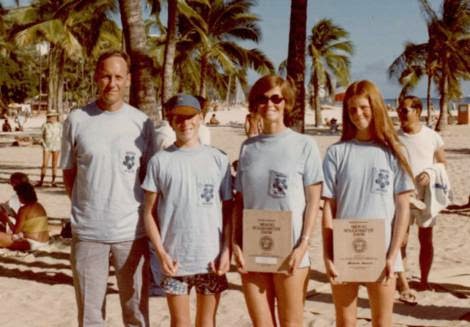 “Bob Luce thought it was a good idea if my daughter Kristin Collins Galbreaith and I would become the first mother-daughter channel swimmers in Hawaii back in 1978,” recalls Judy Collins, the co-founder of the Hawaiian Ironman triathlon.

Kristin was a top competitive pool swimmer in Hawaii at the time who would later swim at the U.S. Naval Academy.

“I finally convinced Kristin that sharks would not be a problem, after a lot of worry and research on my part. As we knew, we started from Lanai in a shark nursery so in the first part from the Lanai shore, mother sharks might escort a swimmer for a bit. The Molokai end [of the Kalohi Channel] was a shark location too. Fisherman came up on the radio warning us away from the nearest swim destination on Molokai.

Kristin and I and John [Collins] were in the swim and on the boat with Bob Justman and Jody Pollack from Lanai to Molokai. We were swimming together until a big shark kept tracking Kristin – and only Kristin. We changed swim positions to distract the shark. Kristin and I even switched swimsuits during the swim. No change. Kristin and I then exited the water. The shark turned back. Bob and Jody swam on.”