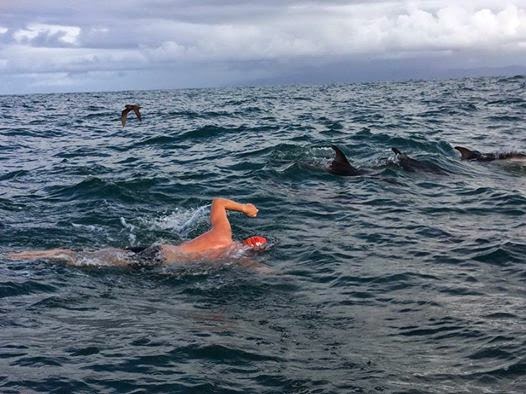 Adam Walker, known as Mad Adam, and his protective pod of dolphins in the Cook Strait continue to be an online hit with over 4.4 million views on YouTube (see below):

From being featured on Japanese television to being shown in Hawaii, New Zealand, Australia and America, the personable British swimmer and coach has been pleasantly surprised by the media attention on his sixth Oceans Seven channel swim in the Cook Strait. “It was a truely amazing experience. I can’t explain the experience I had out there, it felt like the dolphins initially knew I was going through a bad time and they came to give me a boost.

The incredible thing was they stayed with me for so long, even when I stopped for a feed they were bobbing up and down waiting for me to continue. They would do circles around me and stay very close, everytime I put my hands in the water there were always 3 or 4 within touching distance.

No matter what speed I went they could sense it and just go a little quicker. I touched one on the tail, however I was being very careful not to disrupt them.

It did feel like they were my training partners and protectors from the shark, although I didn’t say too much to the media apart from there was a shark for a short period of time then it went away. The amazing thing is they stayed with me throughout the shark sighting and another 45 minutes when the shark left.

I have to say it felt like there was a reason they stayed with me for so long, maybe there were more sharks hovering below and they were staying with me until the coast was clear. We will never know the actual reason, all I know it was magical and one I will never forget.”

For more information on Walker’s swim, visit here. Mad Adam will also be one of the featured speakers at the 2014 Global Open Water Swimming Conference in Isle of Bute, Scotland.