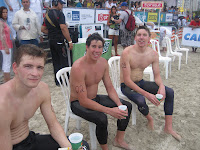 Guanabara Bay is not Copacabana Beach.

We find it unfortunate that there are some people in the aquatics world who believe that media reports (e.g., see AP report here) imply or infer that the Olympic 10K Marathon Swim either will be cancelled or should be moved from Rio de Janeiro to other locations.

We have even read comments that the 2016 Rio Olympic Games 10 km marathon swim should or will be moved to London.

The Olympic 10K Marathon Swim will be held in Copacabana Beach that sits on the east coast of Brazil on the Atlantic Ocean. Not only are there thousands of tourists and locals who frequent this beach daily, but it is also the location of numerous open water swimming, stand up paddling, and other marine sports competitions including the King and Queen of the Sea (Rei e Rainha do Mar in Portuguese) events and Travessia dos Fortes.

Fortunately for open water swimming athletes, their coaches, and fans, Copacabana Beach is not Guanabara Bay. The global media correctly reports that Guanabara Bay is heavily polluted. There are no open water swimming competitions held in this bay for good reasons. Frankly, it is unfortunate especially because the Organizing Committee of the 2007 Pan American Games had promised that Guanabara Bay would be clean by 2007. But little progress has been achieved even for the 2016 Olympic Games. It is true – and a problem – that the pollution is a major concern for the sailing and windsurf events at the 2016 Rio Olympics which will be held at Guanabara Bay.

Recently, some sailors from Austria and Germany have been there and reportedly said that they were hesitant to put their feet in the waters. Looking at Guanabara Bay, this is a reasonable concern.

But the Olympic 10 km marathon swim will not be held in Guanabara Bay. As can be expected in a beach bordering a major metropolitan area, Copacabana Beach is not pristine and there is plenty of urban runoff in the water, especially after a rain. But it still remains one of the world’s most iconic beaches and presents one of the world’s greatest natural amphitheaters for open water swimming competitions. With a twice daily inflow and outflow of water from the Atlantic Ocean, major events like the Rei e Rainha do Mar and Travessia dos Fortes are hugely successful.

So we agree partly with the global media and IOC reports about the 2016 Rio Olympic Games. There is much to worry about the sailing and windsurfing events in Guanabara Bay, but at the same time, we believe the the Olympic 10k Marathon Swim in Copacabana Beach in Rio de Janeiro can become one of the greatest open water swimming competitions in history.

The INEA (Instituto estadual do ambiente) is the environmental institute of Rio de Janeiro. The INEA is responsible for monitoring the quality and cleanliness of the beaches in Rio de Janeiro where its report is on the beach conditions are publicly released (see here). Beaches tagged in green are the clean; beaches tagged in red are the dirty and it is not recomended that one enters in those waters. Copacabana Beach is green and ready to go. Conversely, Botafogo and Flamengo are dirty. Botafogo and Flamengo beaches are directly linked with Guanabara Bay.

Photo above shows Alexander Studzinski of Germany, Chad Ho of South Africa, and Trent Grimsey of Australia after competing in the King and Queen of the Sea competition on Copacabana Beach.