Skip to content
Previous Next
Pulling Bush With The Quarry Monster 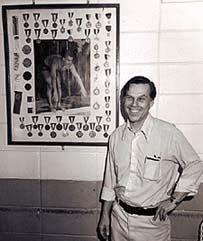 Swimming in a technical skill that requires focus, dedication, and teachers. And there were few who were an innovative, creative, and thoughtful as coach Bob Mattson.

Matson of the Wilmington Aquatic Club in Delaware was a motivator and educator ahead of his time. A multi-talented individual, his team mascot was the Sea Tigers – a hint of some of his creative training methods from the 1970s. “Bob was also an artist, and the Sea Tigers flag was beautiful piece of art,” recalls one of his All-American swimmers Larry Countryman.

“Bob taught us stroke mechanics by separating us in groups and really focusing on our strokes.

He would say things like ‘bubbles are troubles’ regarding your hand path underway, or something like ‘push-offs are the threshold to speed’. He would ask other things like, ‘What if you went the whole way underwater kicking.’ I mean what other coaches were doing these things in the 1970s?”

People in today’s open water swimming world like [FINA official] Sid Cassidy and [American national team coach] Bruce Gemmell swam under the famed coach who did not limit his creativity to the pool.

“Bob also set up a 200-meter long course at a quarry in Avondale, Pennsylvania where we used to do open water swims. He set up a 400-meter course with these syterofoam as he sat on a dock with a pace clock.

Then he used to switch up the [open water] course and then we would do “short-course” swims in the quarry.

The older kids used to tell us about the ‘Quarry Monster’ which was a scary-looking tree trunk that was right below the surface of the water. You knew it was coming up as you swam along the course, but it still scared [the younger ones]. He was really a great coach.”

The Wilmington Aquatic Club swimmers of the 1970s – like many other teams over the decades – had their own lingo. “Our team had a saying, ‘Pulling bush’, we’d like to say,” says Countryman. “In the quarry when we would do our open water workouts, there was a bush where one or two swimmers could hide from the coach. He couldn’t see you so you wouldn’t have to do the whole 400. We used that term a lot. Even if we did not do something in the pool, we would call it ‘pulling bush’.”