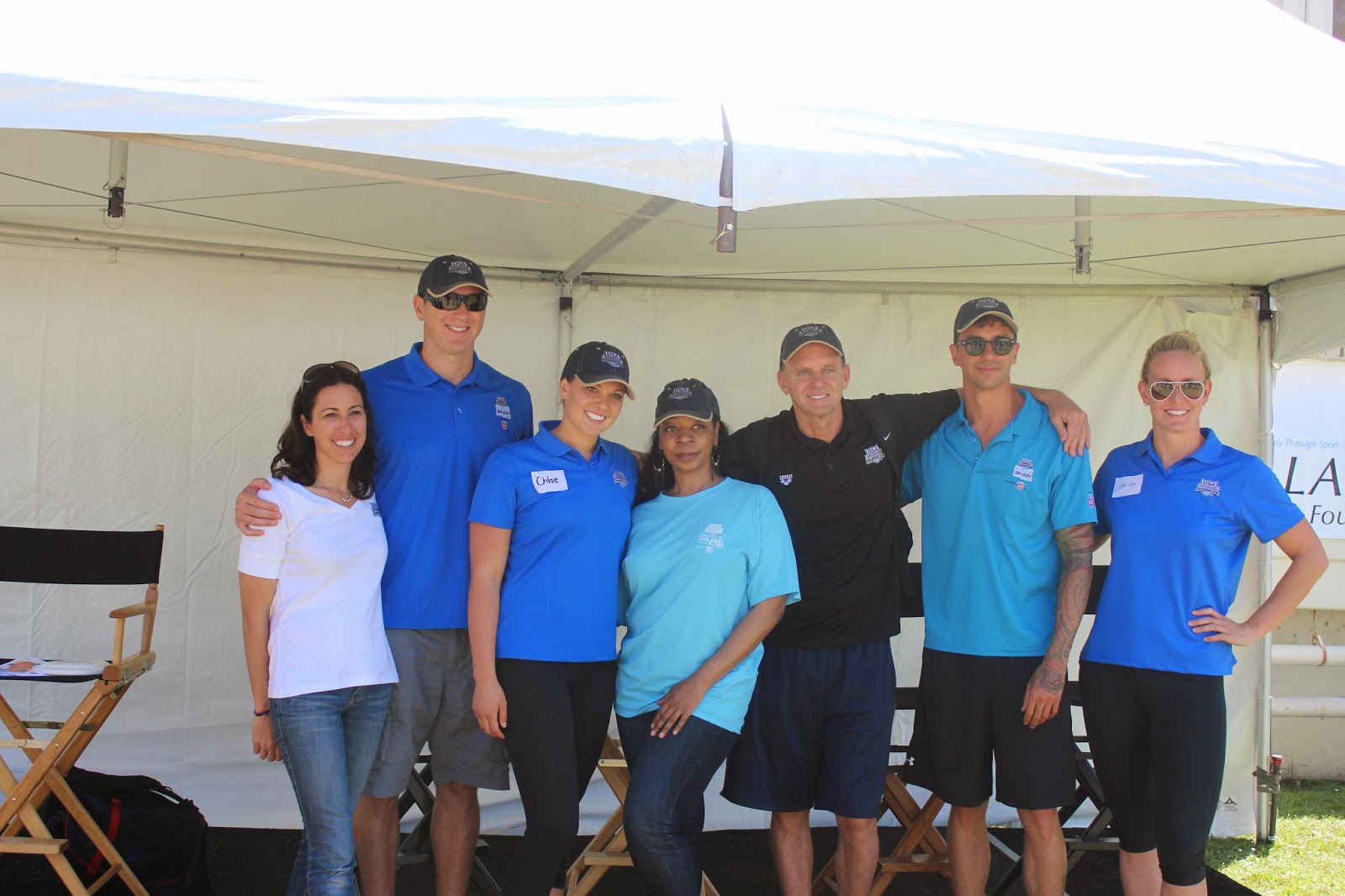 Olympians Janet Evans, Jason Lezak, Chloe Sutton, Rowdy Gaines, Anthony Ervin, and Jessica Hardy were in Long Beach, California today giving advice on how to be safe around the water.

With a collective 20 Olympic medals and 38 world records between them, they all had fantastically interesting tidbits of information to share.

Hosted by the USA Swimming Foundation, the Make a Splash Tour is a water safety and swimming festival that was held at Belmont Plaza’s new outdoor 50m pool on the beach.

From Ervin’s always heading towards the water since he could walk as a children to Hardy’s use of stand-up paddling around Naples Island as a form of cross-training, the sextet of aquatic greats enthralled the audience with humor, Olympic memories, and motivational anecdotes.

“I am real skinny,” says Ervin. “So I like aquariums when it comes to the ocean, but I always wanted to be on the swim team like my older brother.”

When the discussions turned to the open water, Steven Munatones spoke about the how to protect yourself against creatures that strike the most fear in the world’s oceans including sharks, leopard seals, box jellyfish, hippopotami, and crocodiles.

The top 10 most potentially dangerous creatures in the open water for swimmers are below:

1. Polar Bear
Found in the Arctic. They look cute, but they are extremely dangerous. They are one of the few animal species that will hunt a human. They do not fear man and can move very quickly.

2. Nile Crocodile
Found in many rivers and lakes in Africa. They are patient. They wait. They are ambush predators. It is difficult to see them – because most rivers and lakes are murky. Not many people survive a crocodile attack.

3. Hippopotamus
They kill more people in Africa than any other animal, other than the mosquito (malaria). A bite from a hippo is a serious wound.

4. Leopard seal
They are frightening looking animals with razor sharp teeth found off the Antarctic continent. They bark a blood curdling hiss when swimmers get near. One moment they will kill a penguin and drop it in front of a swimmer as a gift. The next moment they are trying to bite human legs.

6. Box Jellyfish
Some species are among the most venomous creatures in the world and are found off the Australian coast, but they are invading other waters around the world. A sting can be fatal.

7. Orcas or killer whales
They can handle themselves well against the Great White Shark. Enough said.

8. Sea snakes
Air-breathing aquatic snakes have some of the most potent venom of all snakes. Some have gentle dispositions and bite only when provoked, but others are much more aggressive and teeth may remain in the wound.

9. Needlefish
These slender fish have long, narrow jaws filled with multiple sharp teeth and can jump out of the water at high speeds over the decks of shallow boats, especially when attracted by light at night.

10. Piranha
Known for their sharp teeth and a voracious appetite for meat, the total number of piranha species is unknown with estimates ranging from fewer than 30 to more than 60.

There are other predators and creatures for open water swimmers to be cautious of, including homo sapiens, however, humans are visitors to the marine world where its natural denizens must be respected and protected.