Skip to content
Sing If You Must In The Open Water 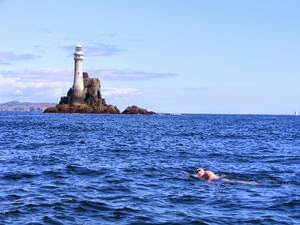 Stephen Redmond said mantras – repeatedly – when he reached the nadir of his marathon swims. He repeated the names of his children over and over again until he got out of his funk.

Some swimmers pray when they get tired, cold, or want to quit. Some swimmers try not to think of anything; others meditate as they swim; some compartmentalize and try to put their pain or discomfort or cold in a small corner of their brain. Others sing.

Admiral William H. McRaven, ninth commander of the U.S. Special Operations Command, gave a popular, inspirational graduation speech at the University of Texas on May 17th.

In his speech, he talked about singing and how it helped me get through some very tough, extremely cold times in the ocean.

“…the ninth week of SEAL training is referred to as Hell Week. It is 6 days of no sleep, constraint physical and mental harassment, and one special day at the Mud Flats…[where you] spend the next 15 hours trying to survive the freezing-cold mud, the howling wind, and the incessant pressure from the instructors to quit…

…looking around the mud flat, it was apparent that some students were about to give up. It was still over 8 hours till the sun came up – 8 more hours of bone-chilling cold. The chattering teeth and shivering moans of the trainees were so loud it was hard to hear anything…

…then, one voice raised in song. The song was terribly out of tune, but sung with great enthusiasm. One voice became two, and two become three, and before long everyone in the class was singing.

We know that if one man could rise above the misery, then others could as well. The instructors threatened us with more time in the mud if we kept up the singing, but the singing persisted. And somehow the mud seemed a little warmer, the wind a little tamer, and the dawn not so far away…

So sing, pray, meditate, or compartmentalize if you must…and get your crew involved if they will, together like Admiral McRaven, you can overcome the cold, wind, and obstacles of the sea.