Skip to content
Previous Next
Blue Journey, An American Samoa Documentary In Scotland 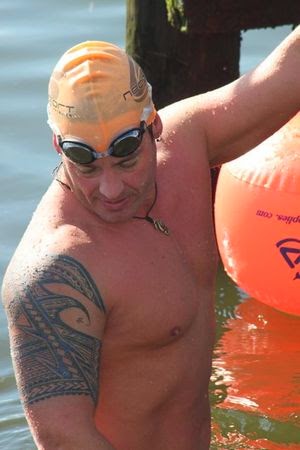 Bruckner Chase received a grant from the National Marine Sanctuary Foundation and put it to good use in the open water.

And now it is coming to shore.

His Hollings Grant film project will be featured at the 2014 Global Open Water Swimming Conference on the Isle of Bute, Scotland in September. “The film is the first of what is planned to be many more Blue Journey endurance expeditions that explore our personal connections to the oceans and share the stories of ocean communities around the world,” explains Chase.

“The inspiration behind Blue Journey American Samoa: Stronger Together, The Waterman’s Way is the Samoans’ ancient connection to the ocean as a foundation upon which we create and inspire a global Blue Journey towards actions that support the safety and health of all our communities and our oceans.

The immediate goal of the project was to teach and inspire the local youth, businesses, government agencies and villages to take an active role in protecting their own health and safety as well as that of the aquatic environment around them.

The ultimate goal of the Blue Journey American Samoa initiative is to highlight on an international level the success already being realized in American Samoa through the educational programs of the Department of Public Safety’s Marie Patrol Division, the local high schools, various community projects, and the villages of Aunu’u and Leone. Together these programs and groups create the potential for new career opportunities within the Territory while also enabling a new level of engagement and stewardship towards the oceans we all share. The film’s creators also believe the Samoan connection to the oceans can lead the way for other communities to connect with and care for our oceans.”

The film highlights the ocean experiences around American Samoa of the waterman currently with a headquarters in New Jersey and offices ranging from California to American Samoa. Chase’s impassioned work within the American Samoan community aims to link the health of the marine environment with the health of the communities he serves. Set against the backdrop of the newly expanded National Marine Sanctuary of American Samoa, with a specific focus on the island of Aunu’u and Fagatele Bay, the film overlays Chase’s individual ocean challenges with an inspiring story of the village of Leone’s fight to overcame tragic losses and its near-complete devastation from the 2009 tsunami.

“My wife [Dr. Michelle Evans-Chase] and I want to positively impact how we feel, think and act towards our oceans. I was given the Matai (Chief) title of Uila o le Sami (Electricity in the Ocean) by High Talking Chief Fuiava of Aunu’u. I consider myself part of that village and committed to improving the health and well-being of the Samoan community.”