Skip to content
Previous Next
Guanabara Bay Is Not Copacabana Beach 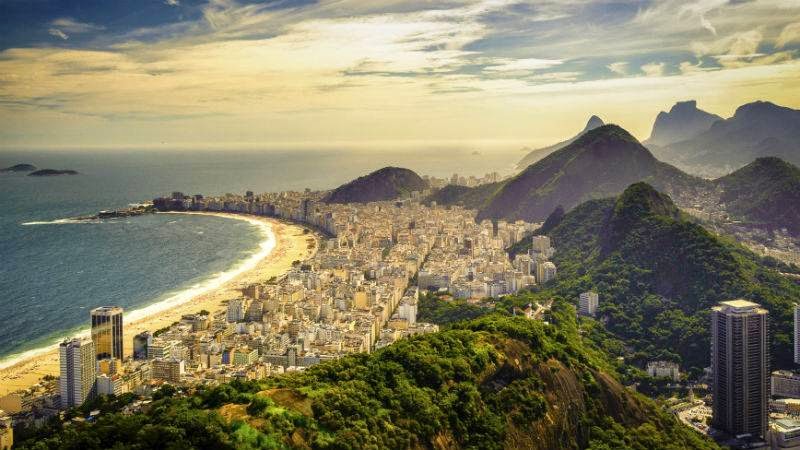 Stephen Wade of Associated Press wrote an article that was reported by ABC News…that continues to imply that the conditions in Rio de Janeiro for marathon swimmers and triathletes are dangerously dirty and unsafe for the 2016 Rio Olympic Games.

Wade reports on the obviously polluted conditions of Guanabara Bay (Baía da Guanabara) and the broken promises of the organizing committee.

But Guanabara Bay is not Copacabana Beach where the Olympic 10K marathon swimmers and triathletes will compete.

We find it unfortunate that there are some people in the aquatics world who believe that media reports (e.g., see AP report here) imply or infer that the Olympic 10K Marathon Swim either will be cancelled or should be moved from Rio de Janeiro to other locations.

We have even read comments that the 2016 Rio Olympic Games 10 km marathon swim should or will be moved to London.

The Olympic 10K Marathon Swim will be held in Copacabana Beach that sits on the east coast of Brazil on the Atlantic Ocean. Not only are there thousands of tourists and locals who frequent this beach daily, but it is also the location of numerous open water swimming, stand up paddling, and other marine sports competitions including the King and Queen of the Sea (Rei e Rainha do Mar) events and Travessia dos Fortes.

Fortunately for open water swimming athletes, their coaches, and fans, Copacabana Beach is not Guanabara Bay. The global media correctly reports that Guanabara Bay is heavily polluted. There are no open water swimming competitions held in this bay for good reasons. Frankly, it is unfortunate especially because the Organizing Committee of the 2007 Pan American Games had promised that Guanabara Bay would be clean by 2007. But little progress has been achieved even for the 2016 Olympic Games. It is true – and a problem – that the pollution is a major concern for the sailing and windsurf events at the 2016 Rio Olympics which will be held at Guanabara Bay.

Recently, some sailors from Austria and Germany have been there and reportedly said that they were hesitant to put their feet in the waters. Looking at Guanabara Bay, this is a reasonable concern.

But the Olympic 10 km marathon swim will not be held in Guanabara Bay. As can be expected in a beach bordering a major metropolitan area, Copacabana Beach is not pristine and there is plenty of urban runoff in the water, especially after a rain. But it still remains one of the world’s most iconic beaches and presents one of the world’s greatest natural amphitheaters for open water swimming competitions. With a twice daily inflow and outflow of water from the Atlantic Ocean, major events like the Rei e Rainha do Mar and Travessia dos Fortes are hugely successful.

So we agree partly with the global media and IOC reports about the 2016 Rio Olympic Games. There is much to worry about the sailing and windsurfing events in Guanabara Bay, but at the same time, we believe the the Olympic 10k Marathon Swim in Copacabana Beach in Rio de Janeiro can become one of the greatest open water swimming competitions in history.

The INEA (Instituto estadual do ambiente) is the environmental institute of Rio de Janeiro. The INEA is responsible for monitoring the quality and cleanliness of the beaches in Rio de Janeiro where its report is on the beach conditions are publicly released (see here). Beaches tagged in green are the clean; beaches tagged in red are the dirty and it is not recomended that one enters in those waters. Copacabana Beach is green and ready to go. Conversely, Botafogo and Flamengo are dirty. Botafogo and Flamengo beaches are directly linked with Guanabara Bay.

The article by K. Annabelle Smith states, “John Coates, vice president of the International Olympic Committee, called Rio’s preparations for the 2016 games “the worst” he’s seen yet…At an Olympics forum in Sydney, Australia, Coates said construction hadn’t begun in some venues in Rio de Janeiro and that infrastructure and water quality are behind schedule.”

But what we have seen several times first-hand of the Olympic 10 km marathon swimming venue and organization on Copacabana Beach in Rio de Janeiro, the open water swimming event at the 2016 Rio Olympics will be an overwhelmingly outstanding event despite the unknown dynamics of the Atlantic Ocean and the swirling waters of Copacabana Beach which can range from flat and tranquil to rough and wavy.

The organization of the open water swimming events and its local officials have been excellent in all kinds of conditions, from a humid rainy day to a stifling heat. The athletes are treated exceedingly well, the venue is open for hundreds of thousands to witness from the wide sands on Copacabana, and construction issues that may be problematic with other sports are definitely not an issue for the open water event. 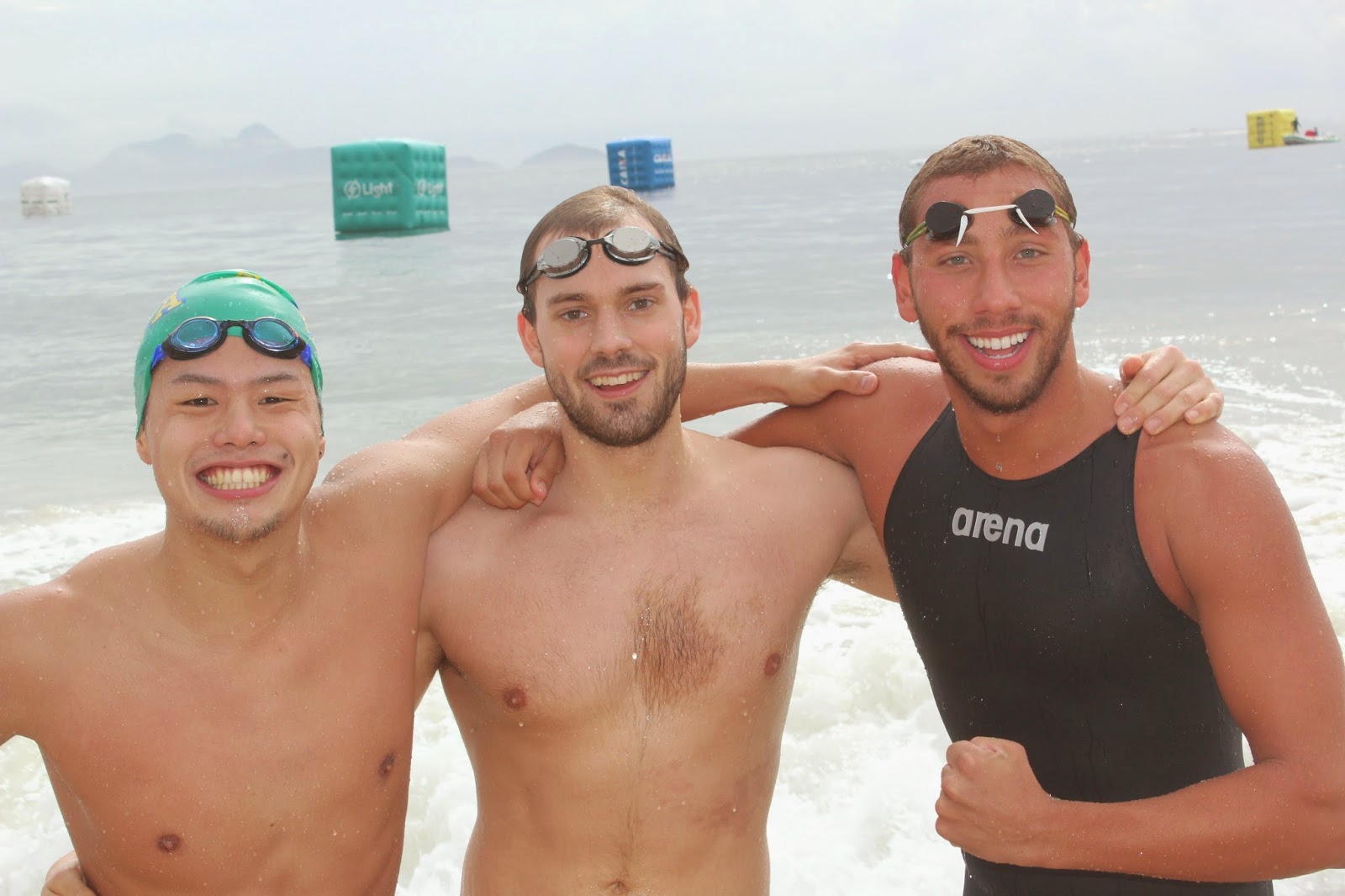 Olympic hopefuls like Yasunari Hirai of Japan (left), Xavier Desharnais of Canada (middle) and Samuel de Bona of Brazil (right) have swum in Copacabana Beach and are looking forward to represent their countries at the 2016 Rio Olympics marathon swim.

As the excitement builds, fans are estimating that the number of spectators on Copacabana Beach may be north of 300,000 people and possibly as high as 500,000 cheering the Olympians.

Beside being a rough water ocean course, Copacabana Beach will certainly be dramatically different in many ways from the 2008 Olympic 10K Marathon Swim in China (Shunyi Olympic Rowing-Canoeing Park), the 2012 venue in London (Serpentine), and the 2020 venue in Tokyo (Odaiba Marine Park).

Judging from the excitement seen on Copacabana Beach during the Olympic announcement, there may be a whole lotta smiling, dancing, cheering and laughing involved…especially if Brazilian swimmers stand on top of the podium.

For information on the Olympic 10K Marathon Swim, visit here.

Upper photo by Getty Images shows Copacabana Beach where the 10 km marathon swim course will be held between the sandy shores and Forte de Copacabana.