Skip to content
Jerry Kerschner Has Suit, Will Travel 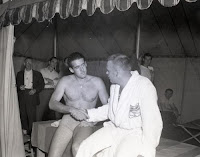 Jerry Kerschner Has Suit, Will Travel

Jerry Kerschner was inducted in the International Marathon Swimming Hall of Fame in 1978. His professional marathon swimming career spanned from 1946 to 1954. In 1948, he won a 12-mile swim in Lake George, New York and the famous 10-mile swim Canadian National Exhibition in Toronto. He repeated victory in the Canadian National Exhibition swim in 1951 where he frequently competed.

Known as the Champ of the Gulf Coast Waters and the self-proclaimed America’s Travelin’ Swim Coach, he won several long-distance races in the Gulf Coast every year and dedicated his life to sharing his passion for swimming with others.