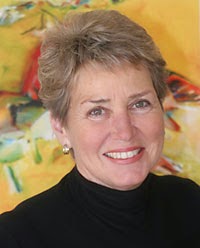 Kaeti Bailie is an artist who owns the Artifax International Gallery and Gifts store in Sonoma, California, but she moonlights as an open water swimmer.

“I like to start with common objects such as a shoe, a figure, a postcard, or some other personal artifact and combine them in such a way as to make them appear extraordinary. I try to infuse my work with a sense of mystery, placing subjects in a relationship with their environment which is recognizable and even familiar yet not fully understood.”

Her artistic style hints of her swimming. She started out swimming freestyle, but eventually started to swim across channels like from the islands of Lanai to Maui.

When she crossed the Maui Channel in 1997, she swam with a pair of 61-year-olds Janet Lamott and Bob West from La Jolla and completed the swim in 6 hours 20 minutes.