Skip to content
Previous Next
Border Buster Is A Friendly Competition 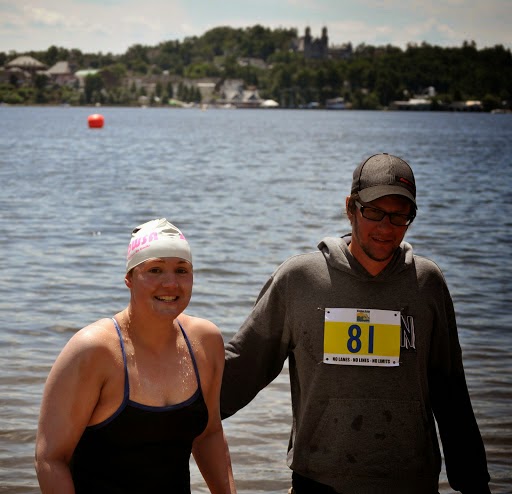 The 15-mile Border Buster is a legal exception to the rule of law.

Passports and border checks are required when crossing the border between Canada and the United States.

But Phil White created an international means to cross the border without showing your passport with the inaugural Border Buster marathon swim that straddles the state of Vermont in the United States and the province of Quebec in Canada. “We developed an expeditious protocol for going north. And coming south into the US, we were cleared without reporting in because we never touched land, never touched a Canadian boat, and had nothing to declare but the sheer joy of an international swim. Special thanks to the officials who worked with us on both sides of the border to make this crossing possible.”

With the backdrop of an international friendly in Lake Memphremagog, 32-year-old Sarah Thomas of Conifer, Colorado and Bill Shipp of Mitchelville, Maryland went after the 24.1 km swim. Thomas won in 7 hours 10 minutes after 54-year-old Shipp set the pace and held the early lead until the swim turned south at Bullis Point in Ogdon, Quebec. Shipp ultimately followed the young leader 23 minutes into the finish. “Together with her husband Ryan Willis, Bill crewed for Sarah during her historic 50-mile double crossing of Lake Memphremagog last September. To see them swimming together in this all new course was a pure joy. 22 years and 23 minutes separated these two,” describes White.

47-year-old Charlotte Brynn from Stowe, Vermont was third overall in 7:52:49 despite recently finishing the Manhattan Island Marathon Swim and getting ready for another Catalina Channel attempt in the Pacific Ocean.

The results of the 2014 Border Buster: