Skip to content
Just Did It, Michelle Macy’s Record From Jersey To France 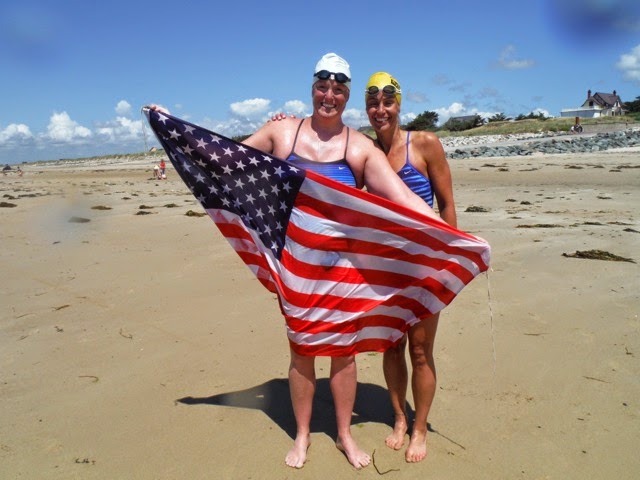 37-year-old Michelle Macy is a no-nonsense swimmer: cool, calm, collected. She follows the creed of her employer, Nike, when it comes to diving in the open water and swimming across channels, across lakes and down rivers.

The Oregon resident just does it. Walk in, swim across, walk out.

And she usually does so in record time.

Yesterday, Macy became the first American woman to swim the Jersey-France course from La Coupe to St Germaine sur plage. Tim Lawrence was her American predecessor in the 18-mile channel in 2006.

After achieving the Oceans Seven last year, Macy has not slowed down. Rather, it seems Michelle has sped up.

Macy shattered the existing women’s record held by Alison Wood of Jersey, set in 2010 in 8 hours 7 minutes. She was so fast that she nearly became one of the few women who hold overall channel swimming records when she just missed the overall record of 6 hours 38 minutes held by Mark Faure Walker of the Serpentine Swim Club.

Macy’s superb swim time was 6 hours 42 minutes. “Huge thanks to club pilots Charlie Gravett and Mick Le Guilcher and Erin Stone for their continued hard work,” describes Jersey Long Distance Swimming Club president Sally Minty-Gravett. “It was a great morning. We set off from La Coupe at 6:30 am and were finished just after 13.10 pm. A great mornings work!“

And Macy’s romp in the Channel Islands is not over.

“The Jersey Long Distance Swimming club is delighted to congratulate Michelle on her great swim today,” Minty-Gravett continued. “And look forward to her added success next week when she hopes to swim around Jersey as well…weather permitting.”

Michelle Macy is shown on the beach with another her training buddy Erin Stone.