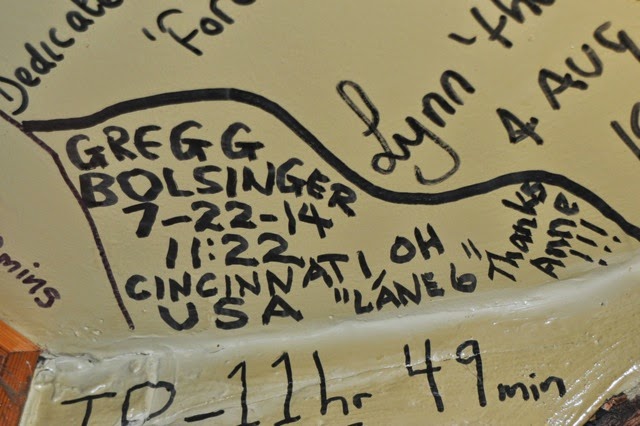 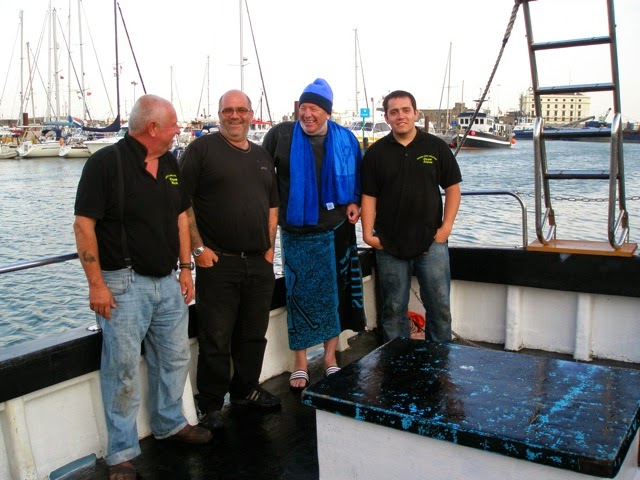 After a successful crossing of the English Channel, it is a traditional honor to sign your name at the White Horse Inn in Dover, England.

Gregg Bolsinger, a 53-year-old from Cincinnati, Ohio earned the right to sign his name to the famed wall at the White Horse. “Lane 6 is a reference to the lane I usually swim in at the Mercy Healthplex in Cincinnati where I am a lap swimmer,” explains the humble attorney.

“Thanks Anne is in gratitude to my coach in La Jolla, Anne Cleveland.”

The journey from Cincinnati to Dover is just one of the many representative backstories that inspires many from all walks of life.

“I am a typical 53-year-old lap swimmer who resumed swimming after his high school retirement. I joined a pool with the goal of swimming 20 laps four years ago. That led me to enter the Big Shoulders 5K in 2010, then the Nike 10K in Miami, the Chesapeake Bay 4.4-mile swim, and last year, the 12.5 Swim Around Key West.

After meeting Anne Cleveland and Mallory Mead last summer at their Channel Clinic in Manhattan Beach, California, a fellow attendee suggested we swim the English Channel. Anne was gracious enough to take me under her wing and begin coaching me this past February. Anne’s experience as an International Marathon Swimming Hall of Fame swimmer, her knowledge of training, and nurturing, positive personality has literally transformed me into a fairly competent open water swimmer in a short time. The open water community is filled with many generous souls who have always been quick to assist, offer advice and support [like Anne].”

Like Bolsinger in the pool back home and for most of his English Channel crossing the repetitive nature of marathon swimming got him a long distance. Lap after lap in America and mile after mile to France, Bolsinger kept going. But like most in the English Channel, there came the witching hour. It was now or never, a go-no go time, do-or-die time.

“My swim was fairly unremarkable until the end. About a quarter-mile from the shore, the captain called me over to the side of the boat to explain he couldn’t get closer to shore due to the shallows. He told me to swim alone. So I swam off alone…just in the wrong direction. Next thing I hear is a horn blasting and everyone is waving me back to the boat. I’m thinking ‘what now?!?’ The captain literally yells at me, ‘What the bloody hell are you doing mate, swimming back to england?!’

I was tired, a bit sore but thought I was doing great. Nope. I elected to tackle the currents head on and was obviously losing in my enthusiasm to finish. I was going backwards, off track and generally not pleasing anyone on the boat, who all wanted this long day to end.“

His swim did come to an end, but fortunately, on shore.

“After the swim, the observer was telling me some finer points of the swim, including my time. He had two; one was my actual time and the one which I would have had, had I not taken that ‘little detour’. The captain later came up and apologized for yelling at me. I told him no worries. I was just thinking of doing a double. I started to get another ‘bloody’ comment but didn’t hear the rest of his sentence over my laughing.”

But before the laughter and smiles came, like many, fear and apprehension.

“My wife Kindra was my crew. The neat thing about her being my crew is that she had never been on a small boat before and was deathly afraid of the whole Channel ordeal. She also had never crewed before, didn’t know what a feed was or how to get it to me, or how and when to prepare one. So, literally the evening before my swim, I’m showing her how the feeds of carb drinks, liquid tylenol, GU’s, and mouthwash operate. She had also only seen me at the start of a swim before, just before everyone becomes a mass of tangled bodies. So this swim was the first time she’d seen me swim for more than 5 minutes in our 27-year marriage. She is, in the truest sense, an incredibly supportive, but non-swimming spouse.”

Supportive is a perfect adjective for Kindra. She really bucked up in the boat. Bolsinger explains, “My boat captain, Andy King said we had 20-knot winds and 3-meter waves the whole way. When I asked him if this was a normal Channel swim, he said ‘No, it was bloody tough out there. You had an exceptional swim, there mate.’ Having a captain say that meant the world to me as only they can put it in context.”