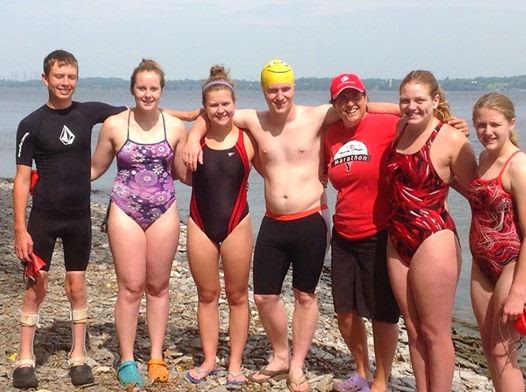 But their planned The Great Lake Adventure had been postponed since July. The weather was bad. Then the lake water temperatures started to drop significantly.

Coach Keith was beside herself in trying to salvage a lot of training as the window of opportunity was quickly closing on the octet from the Kingston YMCA in Ontario, Canada. She did not want to dash dreams; she wanted to help realize them.

The plans for a lengthwise crossing of Lake Ontario were substituted by a safer, closer-to-shore course. The team included 4 disabled swimmers and 5 teenagers so safety was paramount. But safety was also counterbalanced by the deep passion and desire each of the relay members to attempt something audacious. “Big hairy audacious goals,” described Coach Keith who herself was going to swim 3-hour legs every 24 hours as part of the team.

The team started at 10 am on Saturday on their big hairy audacious goal.

But like their problems on land with the weather and conditions, their unfortunate luck continued on the water. “The swimmers are doing well,” explained Keith in the middle of their first day on the lake. “But we are having boat issues. If we don’t solve them by 5:00 tonight, we are going to have to abort the swim. We have a second boat arriving tomorrow.”

Tomorrow came, but so remained the mechanical failures. “It wasn’t safe to continue, so we aborted the swim after 24 hours and 65 km. It was an amazing effort in wavy, cold, tough conditions.”