Skip to content
Chris Guesdon To Speak Of Future In Scotland 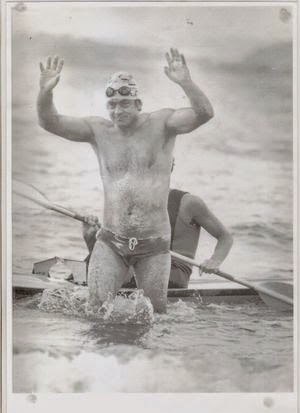 Chris Guesdon To Speak Of Future In Scotland

Chris Guesdon is the man credited with creating the modern format of the Olympic 10K Marathon Swim. He has been so involved and committed to the sport of open water swimming that the number of countries he visited to promote or officiate in runs in the dozens and the number of athletes he has coached or overseen runs into the thousands.

The Australian open water swimming guru who has participated in literally hundreds of amateur, professional, solo and masters events will give a presentation entitled From Where We Have Come To Where We Are Going at the 2014 Global Open Water Swimming Conference on the Isle of Bute in Scotland on September 19-21.

Guesdon has been instrumental in the sport over the past five decades, serving in various multi-functional roles.

As a swimmer, surf life-saver, race organizer, behind-the-scenes administrator, national coach, strategist and race official who has sat for innumerable hours in boats, he has also written open water swimming operations manuals and served as support crew, a lobbyist, a historian and a documenter.

His reach has been global with race experiences throughout Oceania, Asia, Africa the Americas and Europe. His presentation will cover the success of the current open water swimming world and its solid foundation to continue growth in the hopes that Guesdon can step back and mentor others to carry forth the open water swimming mantle.

Guesdon currently serves as the Programme Vice President of the International Marathon Swimming Hall of Fame, an Honouree of the IMSHOF and recipient of the Irving Davids-Captain Roger Wheeler Memorial Award.