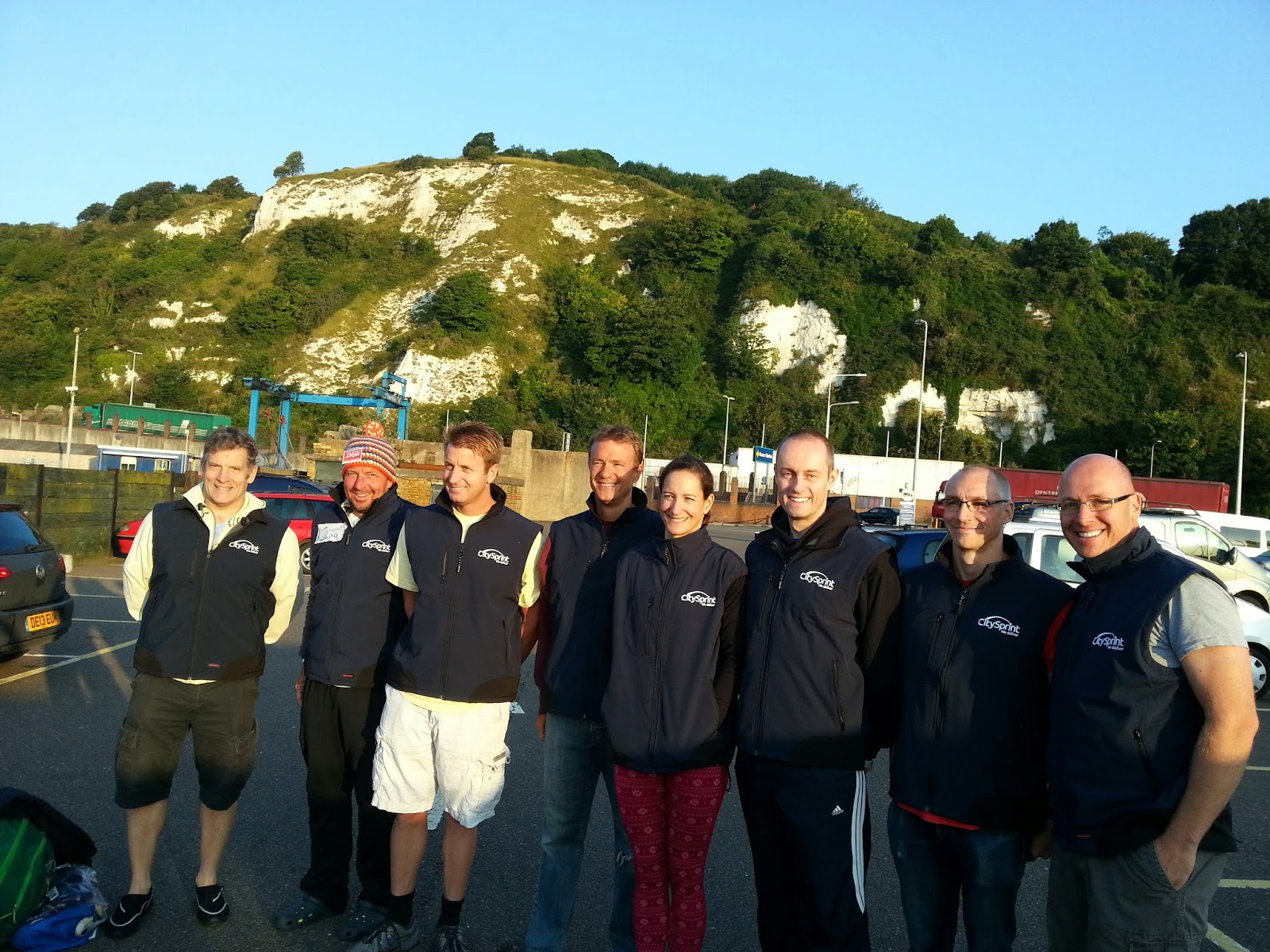 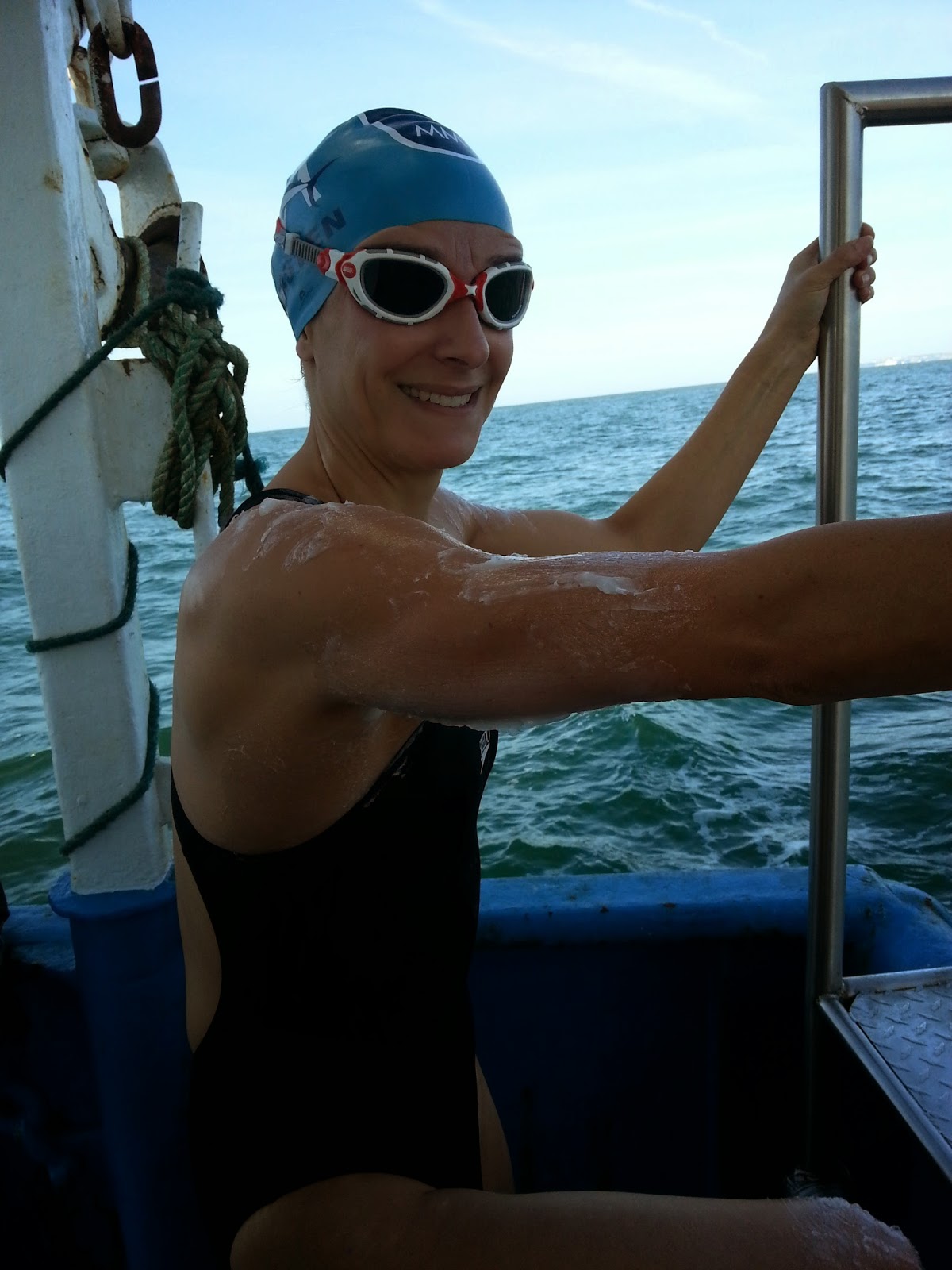 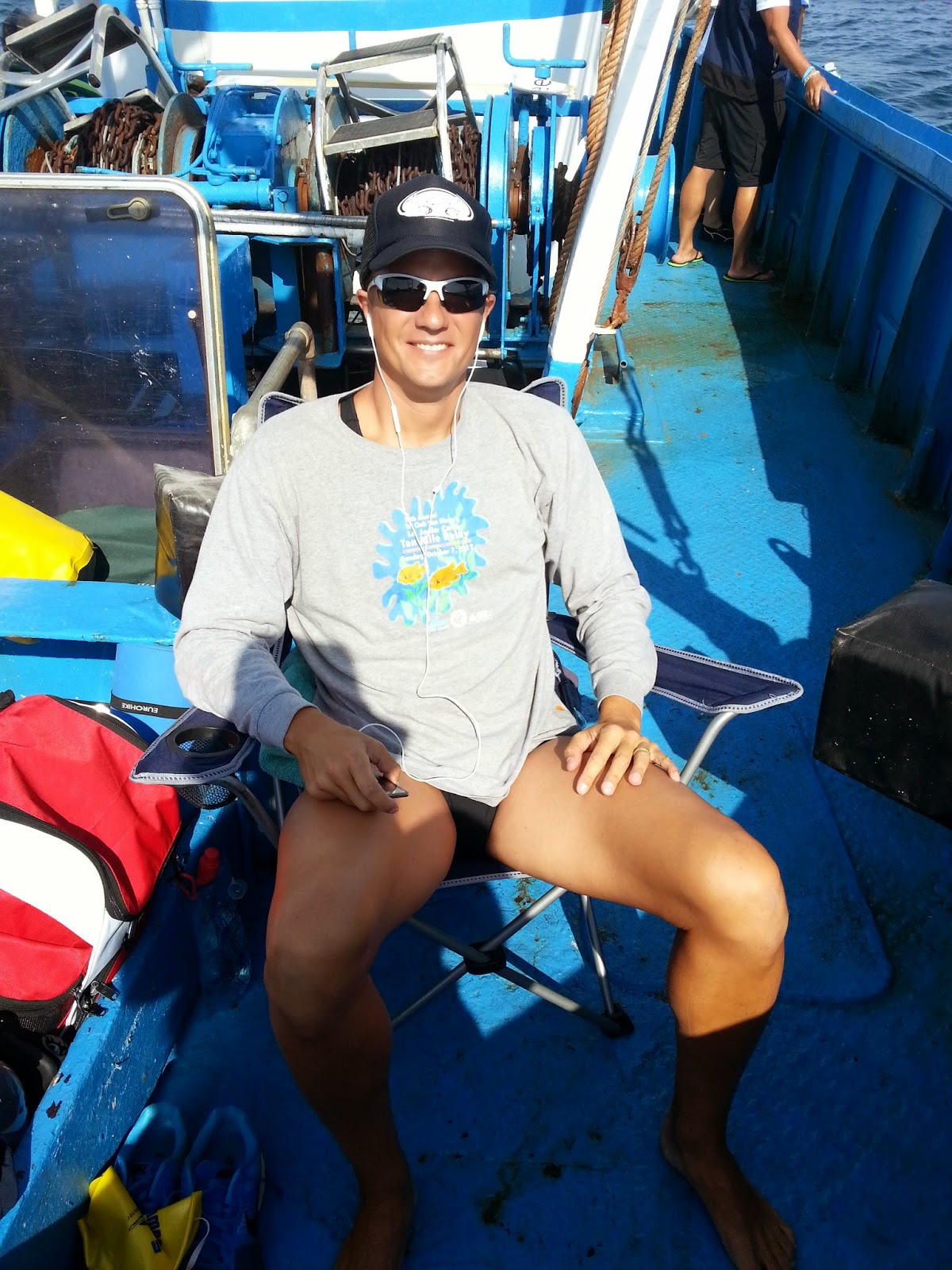 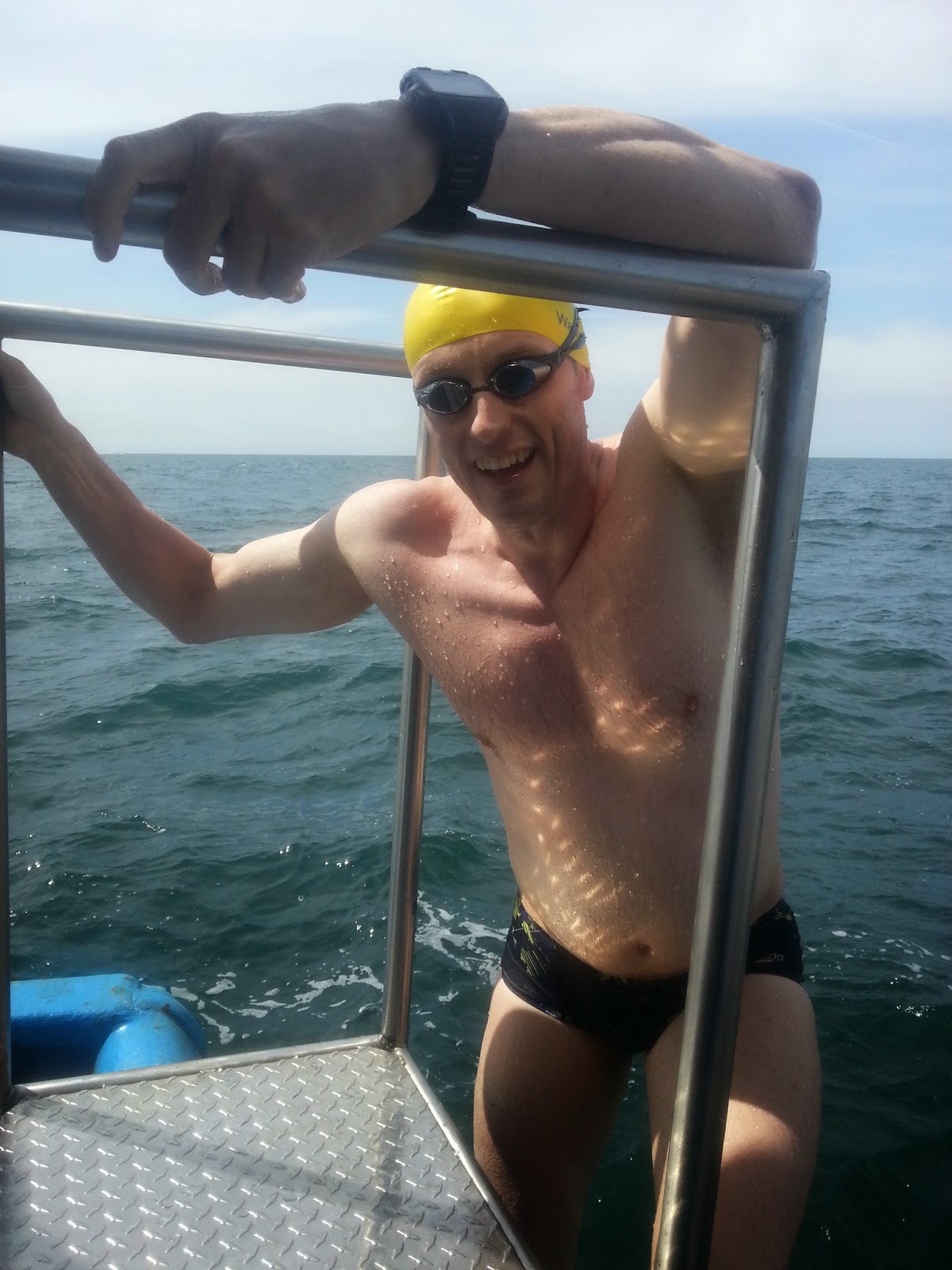 When Kirsten Cameron [shown on left], Christof Wandratsch, Steve West, Andrew Chamberlain, Bernie Zeruhn [shown below on boat deck], and Dave Warren [shown below in goggles] gathered together on the shores of Dover, they were an embodiment of older athletes who had effectively turned back the ravages oftime.

These 40+ year-old swimmers of Generation X were focused on becoming the fastest relay swim ever across the English Channel. It was a tall order, but one in which they were fully committed to achieving.

While age is a number, it is also a fact of life that the six swimmers of the EC6 relay (Total Immersion in the English Channel) has lots on their collective plates.

Parents and professionals, they had to prepare by working in training sessions between work and family commitments. They made sacrifices and choices. Serious as athletes can be, they had to balance all the issues of middle age, from paying for mortgages and raising children to running companies and facing the pressures of budgets, deadlines and bosses.

But this group of Gen X’ers under the leadership of Wayne Soutter and escort boat pilot Reg Brickell, Jr. believed they could out swim and crack one of the longest-held records in the channel swimming world: the famed one-way crossing of the 1990 USA Swimming National Open Water Team, a group that included world champions, top professional marathon swimmers and eventual International Marathon Swimming Hall of Fame inductees.

The team members each found their way to Dover after communicating with each other virtually for months online. While the 1990 team used faxes and dial telephones to communicate with one another, the EC6 used social media messaging, email and mobile devices to strategize with each other. Loads of advice were given to the sextet from the shores of Dover to pool decks from London to Los Angeles.

The sextet carefully researched, collectively considered and diligently discussed myriad issues from how to warm-up on the boat to whether or not to feed during the relay. For they were serious and their goal was to get across the English Channel faster than any group before them.

It was an audacious goal, an unprecedented goal.

But each and every one of the athletes believed it deep within their hearts that a bunch of 40-year-olds could out swim those generations of swimmers before them.

They set their strategy, worked with people like Colin Hill, Jim Boucher, and Wayne Soutter to focus on how best to prepare and swim fast. Over the months in preparation, they shared workouts and training times, sets and distances with one another. The lone female in the group – Kirsten Cameron – challenged her male teammates and braved their ribbing. But the virtual bonding and immediate camaraderies among the group was obvious. This was a team that had its origins in the virtual world, but would soon come together in person and quickly embody the collegiality of open water swimming once they all boarded the Viking Princess of Reg Brickell, Jr..

Christof Wandratsch led off with a quick 5.6 km one-hour leg followed by Cameron’s 5.3 km stint and West’s 5.2 km sprint. The air and water conditions remained favorable for the remaining trio of Bernie Zeruhn, Dave Warren, Andrew Chamberlain all of whom swam 5 km during their legs.

A quiet confidence reigned on the deck of the boats with each subsequent swimmer.

But with 5 km to go, it was clear that the tides were turning and, unfortunately, not in their favor. For the last important stretch to Cap Gris Nez on the French coast, the sextet would have to battle Mother Nature as much as they would the 6 hour 52 minute standard set by the 1990 USA Swimming National Team.

“Christof was sprinting as fast as he could,” recalls Soutter. “He gave it all he could. We all knew it was going to be close.”

The closer EC6 got to the French shore, the shorter the time frame they had to match the 6:52 record. As time dwindled, the stronger the tidal flow became. It started to look like a losing battle as the quiet confidence of the first 6 hours transformed to simple silence.

When it became clear that Wandratsch, the leadoff swimmer would not complete the swim, Cameron got ready and completed the second-fastest English Channel relay of all time.

She reached shore in 7 hours 3 minutes, a remarkable time for swimmers close to a half century on Earth.

But the fact that these Gen X’ers had pushed themselves so far and so fast and came so close to one of the longest-standing marathon records is a testament to their healthy living, aquatic skills, trust in their pilot and each other, and the joy they experienced in route to joining the tens of thousands of athletes who have challenged themselves in the English Channel.

Andrew Chamberlain is shown below giving a hint of the strength and stamina shown by each of the athletes:

Photos courtesy of Wayne Soutter out in the English Channel.