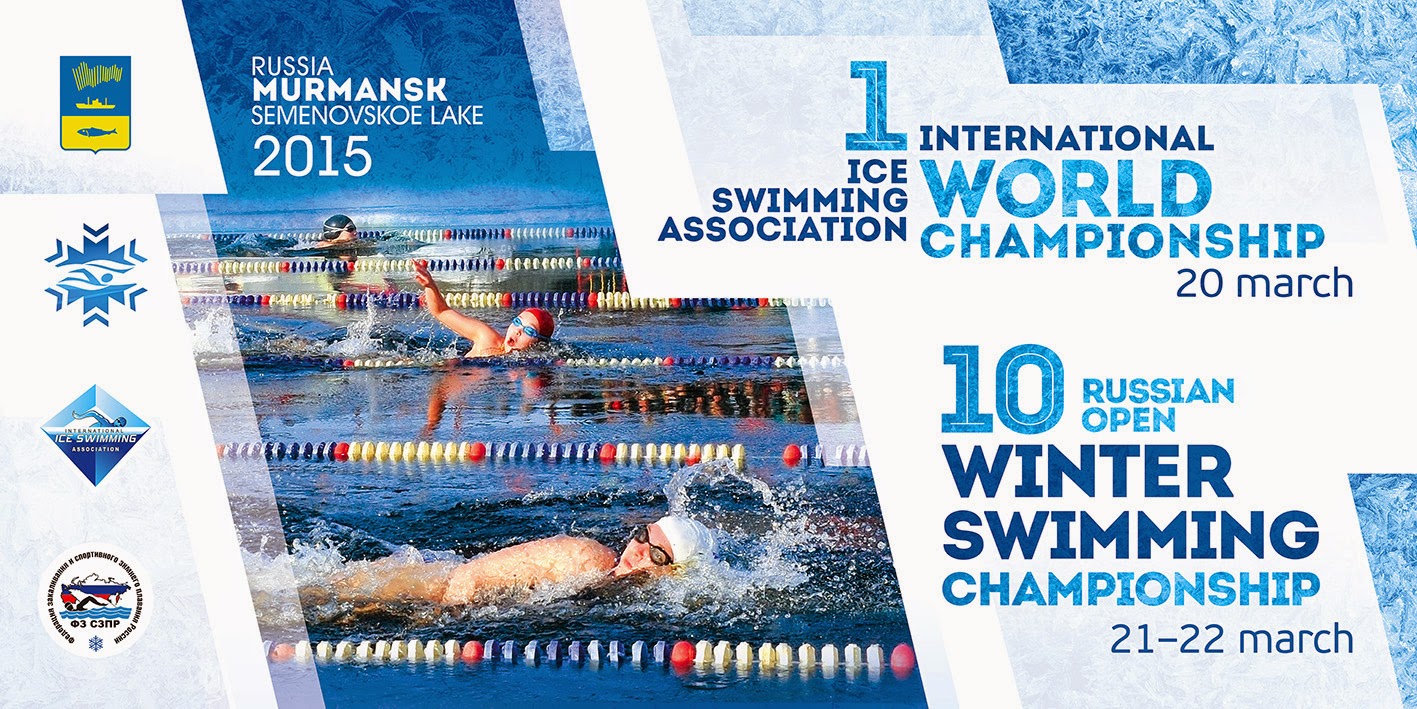 Irina Andreeva and Dmitry Blokhin reported on the 2015 Ice Swimming World Championship in Murmansk, Russia at the 2014 Global Open Water Swimming Conference on the Isle of Bute in Scotland.

This is their report:

Murmansk is the world’s biggest city located inside the Arctic circle. We have polar nights when we do not see the sun for 3 months from December to February. We gaze upwards to the sky to see only stars and the incomparable polar lights. And from June to August, we experience the polar day when the sun does not fall below the horizon, compensating for its absence during the winter months. Murmansk is the city where these special climatic conditions have an impact on the human body. 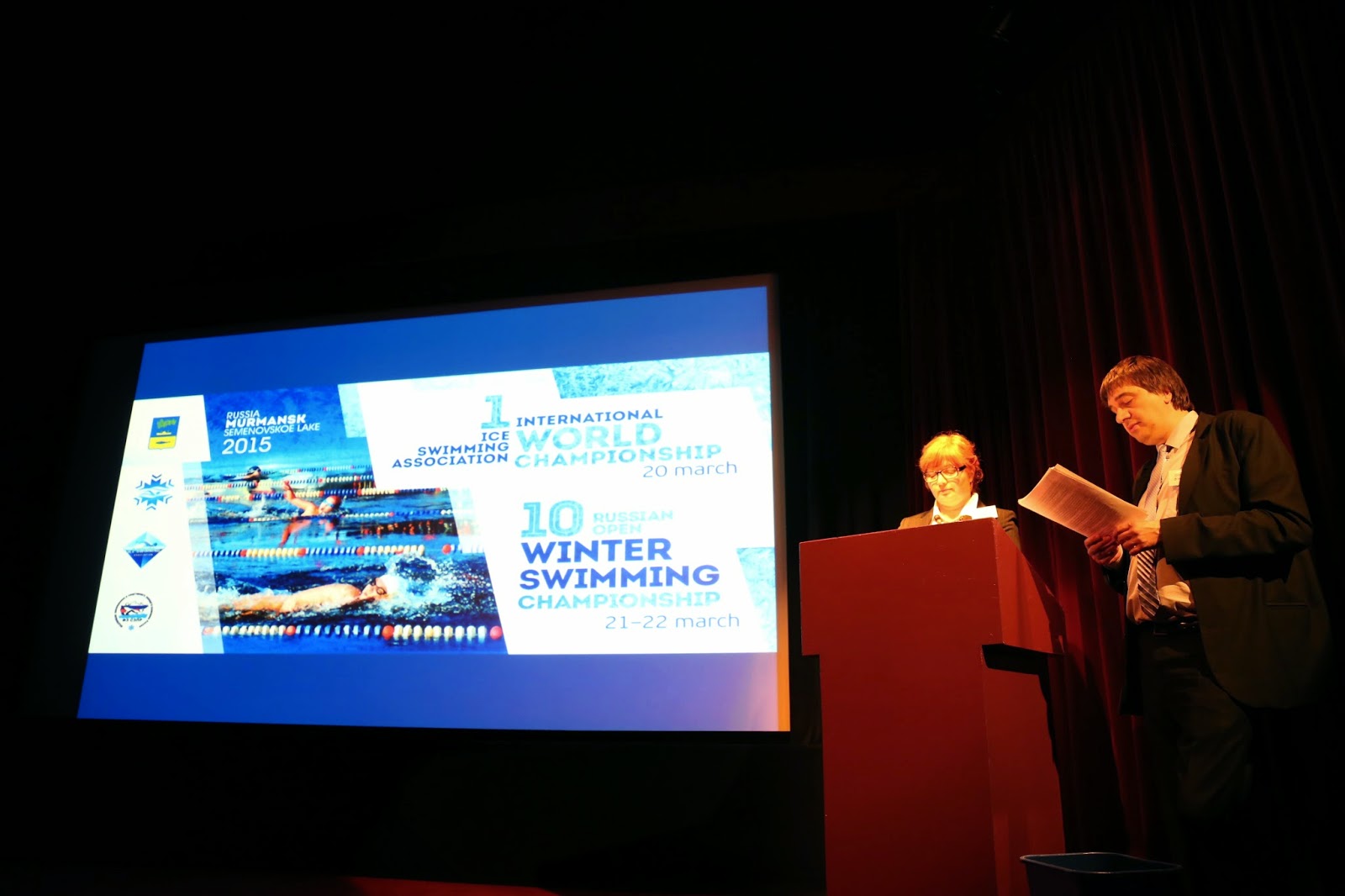 Murmansk is known as the hero town. In 2016, the hero town of Murmansk will celebrate its 100th year anniversary. Murmansk transformed itself from a small port town to a powerful industrial center of the polar region, becoming the Gate to the Arctic and an outpost of Russia in the severe region. Today it is both a scientific and cultural center, rich with interesting sights. It is a city with a large number of the international sporting events, seminars, festivals and exhibitions where representatives from Finland, Norway, Sweden, Turkey and Holland often participate. 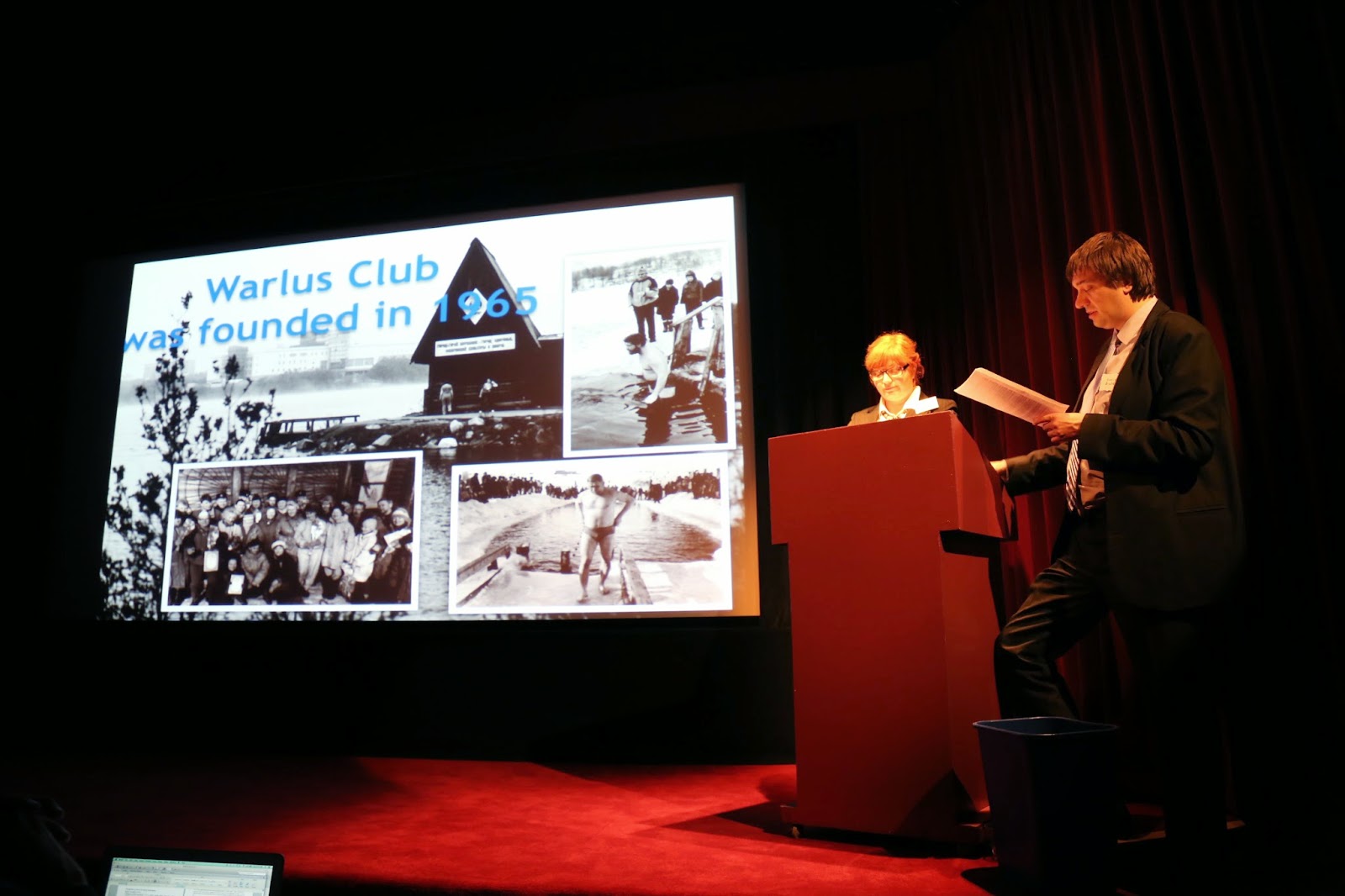 The Walrus Club was founded in Murmansk in 1965. Its main goal is the development of ice and winter swimming among all its citizens. Today there are more than 500 active members in the club who endorse a healthy lifestyle and hardening in cold water. In March 2015, the city will celebrate the 50th Walrus Club anniversary together with many visitors. Over the last 10 years, the Walrus clubmen repeatedly have become winners and award recipients at the All-Russian and international winter swimming competitions including Russian and World Winter Swimming Championships.

The great popularity of doing winter swimming and ice swimming among inhabitants of Murmansk affected that there is a unique long-term experiment in Murmansk already on carrying out a number of sports international competitions on winter and ice swimming.

225 swimmers took part in the international winter swimming competitions from 12 countries of the world in Murmansk in March 2013. In 2014 we had 270 participants take part in the competition. The growth in popularity of winter and ice swimming is seen not only in the Russian Federation, but also far beyond its borders. The competition was highly appreciated both by its participants and the crowds.

Not so long ago, a new Kola Bridge began to work. This four-lane 2.5 km bridge stretches across Kola Bay. Under this bridge starting in 2005, the residents of Murmansk fell in love with long distance open water swims due to the courage of swimmers and appeal of this competition. The 10th anniversary of the Murmansk Mile will be organized along the new Kola Bridge in June 2015 where more than 10,000 citizens and guests to the polar capital traditionally participate.

In 2014, the record in the swim across Kola Bay was set by German swimmer Christof Wandratsch. He swam 1200 meters in water between 4-8ºC, fighting against strong currents for 15 minutes 56 seconds. As the champion of the event, he received a trip to any country of the world.

In March 2014 the President of the International Ice Swimming Association Ram Barkai from South Africa asked the mayor of Murmansk to consider the opportunity to organize the first Ice Swimming World Championship in the history of Murmansk, considering the special climate of our region. Murmansk has the full support of the Governor of Murmansk and the Mayor of Murmansk City, leading enterprises, and the city organizations. They always treat the event and international visitors with special care. 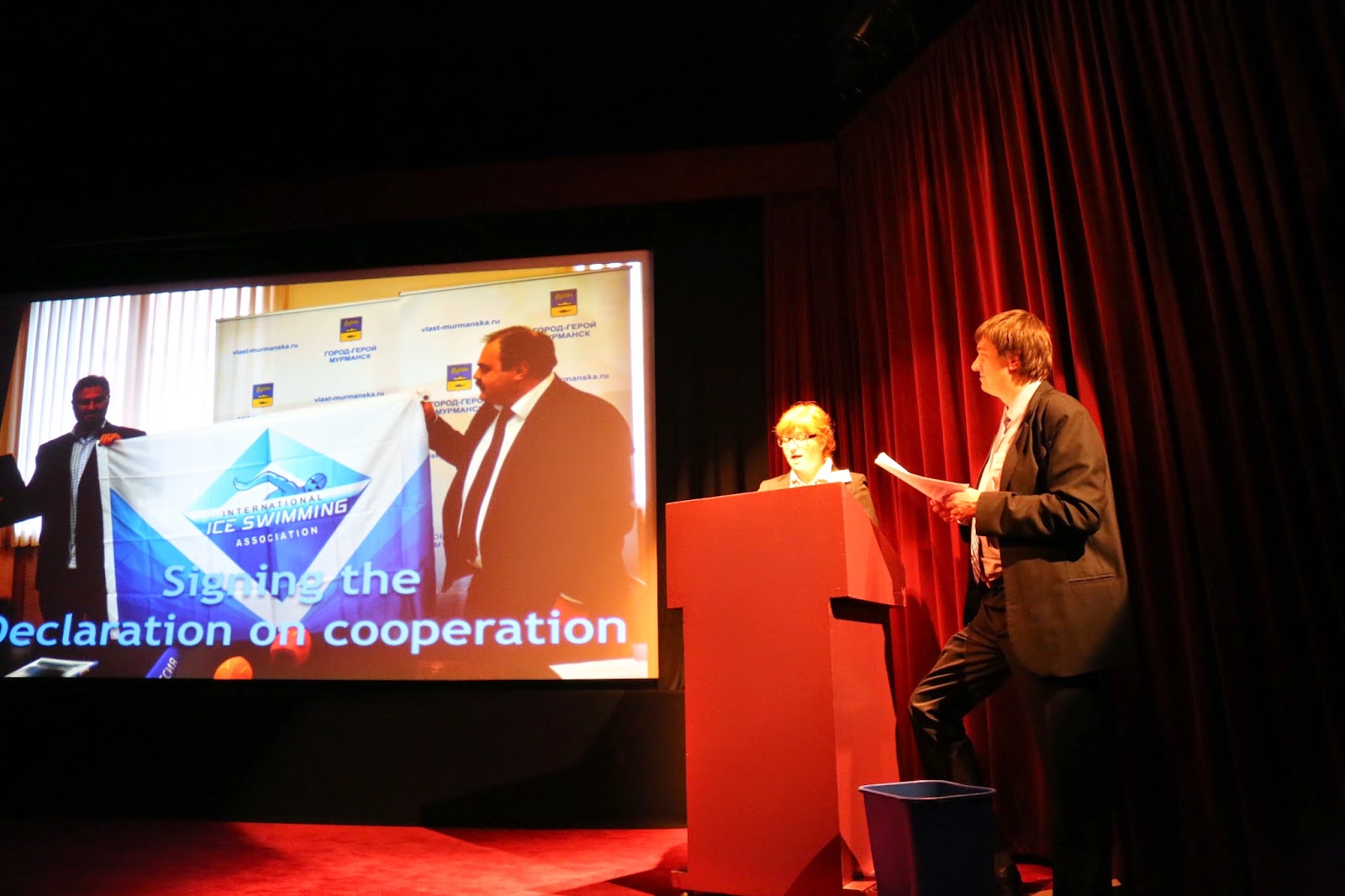 After the negotiations in Murmansk, a declaration on cooperation between Murmansk and the International Ice Swimming association was signed on June 20th 2014. Planning for the first Ice Swimming World Championship in 2015 are underway.

The schedule is listed below: 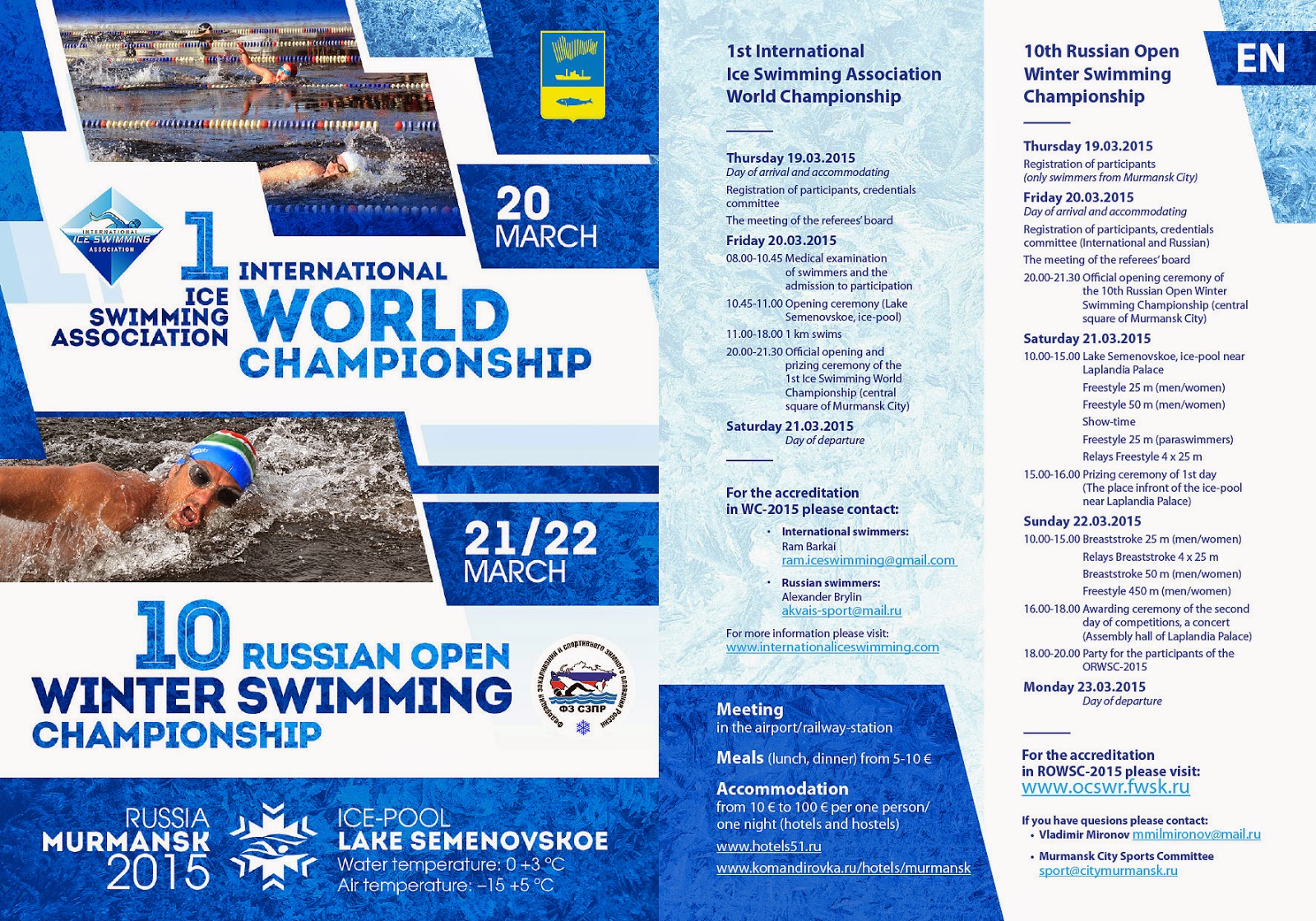