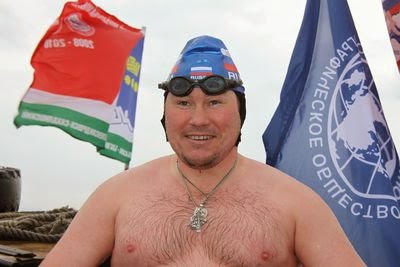 When it comes to swimming in cold water, few people have reached the heights of Alexandr Brylin.

Brylin is a renowned Russian ice swimmer who participated in the unprecedented Bering Strait Swim, the 6-day, 86 km relay swim across the Bering Strait from Cape Dezhnev, Russia, to Cape Prince of Wales, Alaska via Big and Little Diomede Islands.

Among his many accomplishments, he is president of the AQUICE-sport Federation and once established a record for the longest distance swum in an ice hole – 1700 meters in 48 minutes 25 seconds in the Ice Hole Endurance Swimming Championship in Blagoveschensk, Russia in 2010. He swam 2200m in 1 hour 1 minute at the 2012 Russian Winter Swimming Championships in Tyumen, Russia.

After receiving the 2013 World Open Water Swimming Performance of the Year award together with his fellow ice swimmers, Brylin will present a new film on the Diomede Islands crossings between Russia and Alaska at the 2014 Global Open Water Swimming Conference in Scotland on September 19th-21st. The film is called in English: Diomede Swim 2014.

In addition to Barkai’s acceptance of the WOWSA Award, he will also be joined at the conference by a number of the world’s most experienced ice swimmers ranging from Ireland to Russia.

The 2014 Global Open Water Swimming Conference agenda is as follows:

The following documentary films will shown throughout the reception:
*BlueJourney-Amerika Samoa – Stronger Together: The Waterman’s Way (a film by Bruckner Chase)
*Dancing With The Water, Crossing of Lake Pontchartrain (film by Wayne Ewing about Matthew Moseley‘s Lake Pontchartrain crossing)
*Diomede Swim 2014 (a film about a Diomede Islands crossing presented by Alexandr Brylin)
*The Clean Swim – Hong Kong to Macau (a film about Simon Holliday‘s Pearl River Delta crossing)